Early voting began recently in Texas with unprecedented excitement, as a record 15 million registered voters made their way to the polls. Reports say polls are looking more like Black Friday shopping lines than early voting locations. Although we cannot predict the results of the election, one thing is clear: healthcare is the top issue. This is hardly surprising given the impact rising healthcare costs have on families nationwide. Yet, it is surprising and somewhat disingenuous that few, if any, hospitals are designated early voting locations.

As healthcare providers in Dallas, we care for patients from diverse cultural and socioeconomic backgrounds. We’re fortunate to have a front-line view of our healthcare system providing us with valuable insight into how we can improve the system. However, doctors are notorious for not showing up to the polls. Research shows physicians are 18% less likely to vote than the general public. And while 90% of physicians believe political involvement is important, less than one third participate in political advocacy.

However, politics and medicine are not isolated entities. They are intertwined at a systems levels and policy decisions directly impact the way we practice medicine. Hospitals are places where patients go when in dire need of medical attention, and they also can be places for civic engagement.

Parkland Hospital serves as a safety net for over 2.6 million residents in Dallas County and recently hosted a week-long non-partisan voter registration drive to help health care providers, staff, and community members easily register for the upcoming election. In collaboration with the Dallas County Clerk’s Office and medical students at UT Southwestern, more than 400 voters were registered across the medical campus and hundreds more had their questions answered.

The event was a success. It was easily accessible and in a safe space away from patient care. Hospitals employees were notified in advance and they were grateful and appreciative. Many employees shared that registering to vote was on their to-do list, and they were struggling to find the time to do so. The drive also sparked conversations about the upcoming election, increasing the likelihood people will vote this upcoming week.

Hospitals across the country should learn from Parkland’s success and implement similar initiatives in their communities.

The concept of health care entities engaging voters in the political process goes back decades. For example, the Medical Committee for Human Rights (MCHR) provided medical care for civil rights activists during the 1964 Freedom Summer project, which aimed to register African Americans voters in Mississippi. More recently, community clinics in New York have shown they can be effective vessels for engaging politically disenfranchised patients by helping them register to vote. Finally, at least thirteen different states allow hospitalized patients to submit emergency absentee ballots to cast their vote.

Most polling locations are in schools, community centers, churches, and universities. These institutions prioritize giving their community a voice by providing time and space for voting. Many of them also receive federal, state, or county funding in the form of grants or tax breaks. That makes them similar to many hospitals around the country that are tax-exempt. These hospitals have an obligation to give back to their communities, and research shows that many nonprofit hospitals are disproportionately benefiting while providing little in return to their communities. Offering early voting is one way hospitals can give back and earn their tax-exempt status.

Critics will say that hospitals should be exclusively reserved for patient care and that having early voting distracts from a hospital’s mission. We agree that patient care is the primary focus; however, it does not have to come at the expense of civic engagement. The two can coexist. At a time when politics influence the cost of health insurance and dictate certain ways medicine is practiced, it seems fitting that we should have the opportunity to vote at a local hospital.

Hospitals, like schools, are an integral part of the community. And the sign of a health community is one that advocates for itself.  While schools prioritize teaching students in their community, they also recognize the importance of civic engagement. Hospitals of all types, public, private and non-profit, should do the same.

Stephen Haff is a second-year medical student and Hussain Lalani is an internal medicine resident. Dr. Lalani can be reached on Twitter @DrHussainL. 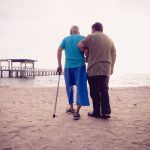