The recent horrible events involving racial profiling, excessive force, and gun violence are deeply troubling but not new. Who can forget the Bronx shooting of Amadou Diallo in 1999 when 41 bullets rained down on his unarmed body. I can uniquely identify with the black experience because of my own numerous experiences of being pulled over for no other apparent reason except for being in the wrong neighborhood, wrong state and for the hue of my skin.

I am Korean American. The most personal tense police encounter that I can remember was when I was coming from a business meeting in Philadelphia, attempting to set up a senior program for refugees. I was driving back to my office when I was pulled over by six police cars and S.W.A.T.

And the most recent police encounter — being pulled over by undercover North Carolina state police en route to my friends’ wedding in South Carolina. I was pulled out of my car and interrogated in the officer’s vehicle. When I recall these events to family and friends they chuckle in disbelief because I am a nurse.

I sympathize with the police force too. Police stick their neck out for us. It should not go unheralded. Not unlike them, according to the Robert Wood Johnson Foundation, “nurses face epidemic levels of violence” and opportunities to be assaulted. Some of my coworkers have been injured in the line of duty after unfortunate patient interactions. In many ways police and nurses are on the same team.

It’s only after being racially profiled that I admit to the officers that I am a nurse in order to de-escalate the situation and provide myself with some level of safety and cover. It works. Some of the police officers that I have encountered are married to nurses or have been cared for by nurses. If Philando Castile had pleaded to Jeronimo Yanez that he was a nurse, perhaps he would still be with us.

As the president and the nation as a whole grasp for answers or solutions to the growing divide between law enforcement and communities of color, I can’t help but see the lack of conversation or attention being placed in area of emergency medical training for our officers or the lack of medical care delivered after excessive force has been applied. In order to improve in this area, we need to re-envision policing in such a way to stop preventable deaths in the field and nurses can play a vital role.

Nurses are in the business of saving lives. It was hard to watch the video of Philando Castile bleed out and being unattended to, gasping. When in the hospital, nurses’ gut instinct is to apply a pressure dressing to wounds, start massive blood transfusions and start CPR.

It was equally difficult to watch videos of Eric Garner’s pleas of “I can’t breathe” because for nurses, securing airway is critical. According to reports, the NYPD officers at the scene did not perform CPR on Garner because they believed that Garner was breathing. If police are vested with the authority to use lethal force, they should also be adequately trained in resuscitating life beyond basic life support. If this is beyond their scope, nurses with backgrounds in trauma and critical care should round with police acting as support for officers who may not know they are choking the life out of someone or that a patient has lost a pulse or is no longer spontaneously breathing.

Another clear example of a need for clinical expertise in the field is on July 20, another unarmed black man and caregiver, Charles Kinsey was shot by North Miami police while he was trying to redirect his autistic patient in the middle of the street. He lay on is back with his hands in the air and pleaded with officers that he was a therapist. They still shot him. After being shot, he was handcuffed and flipped over while bleeding. No medical aid was provided at the time. This is another example where a nurse could have intervened and could discern this was an autistic child and corroborated Kinsey’s statement that he was a therapist with a few simple questions. And may have prevented the shooting or at the very least provided emergency triage at the scene.

Creating new models of care and public safety delivery that ensures both our men and women in uniform and community are both safe need to be explored. Nurses provide that caring bridge to every stripe, and I have no doubt that my colleagues would applied the same measure of quality care to any victim whether a police officer, suspect or bystander.

Jason Lee is a surgical trauma and neurocritical care nurse. 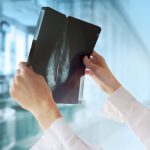 Death by hospital: Who's right? 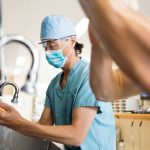 How nurses and law enforcement can work together
5 comments