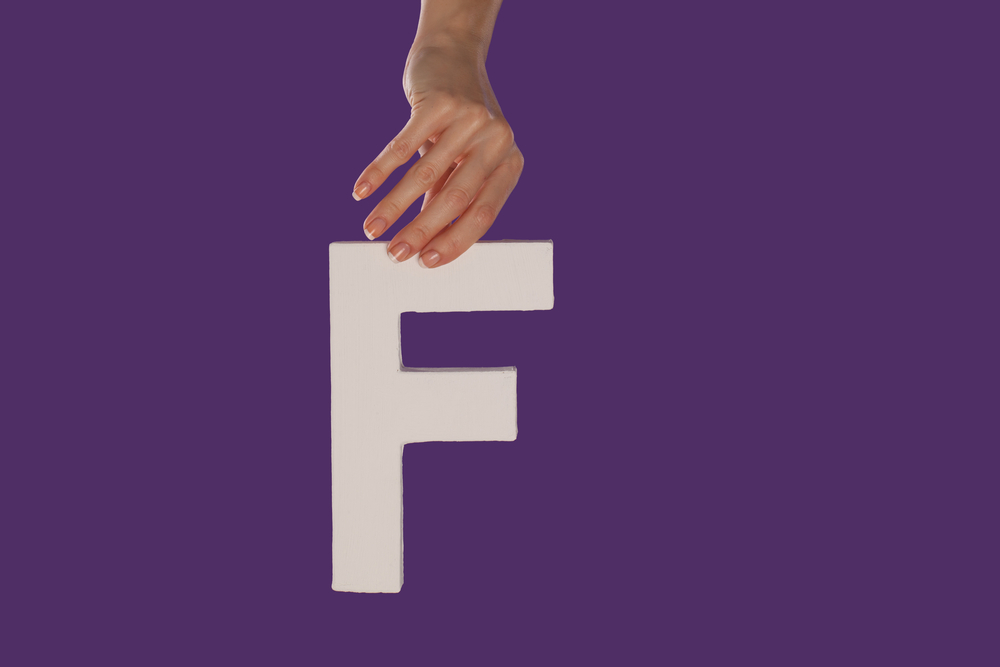 As a physician, you have endured many years of schooling, and you have received many A’s on your report cards. You have passed exams with flying colors, and you have pleased your higher-ups in the food chain. You have come so far, and you now find yourself in a rarefied position that most people only dream about.

So what’s standing between you and your thriving life? Clearly you’re smart enough. So what’s missing?

I’m here to say it’s your avoidance of these three F words: fear, feeling, and failure. As a straight-A student, your greatest liability is your unfamiliarity with failure. I’m not referring to the “identity” of “being a failure.” I’m actually referring to the edge of your comfort zone, which you have been trained to avoid in order to achieve the status you have right now as a physician.

Imagine your fear as a small child, sitting alone in the corner of a room. You are standing at the door, and you see the child. Yet you won’t walk across the room to meet her. She is frozen, her eyes wide and her face filled with confusion. She waits for someone to comfort her. And what do you choose to do? Do you try to “fix” the fear by making it go away? Do you offer her something sweet to eat? Do you vow to condemn or hurt the person who caused her to feel this way?

All of these are common reactions to fear, based in avoidance of feeling fear.

You might notice it’s much easier to imagine this as a hypothetical situation not happening inside you right now. You can remain objective, intellectual, and safe from feeling anything yourself, as you consider something outside you, happening “over there.”

And what happens when you touch and stay with your own fear, rather than avoiding it? What happens when you discover your courage to walk toward the small child who is your fear, embrace her, feel the soft animal of her body, and let her transform you?

When I was a senior in high school applying to college, I remember one university had as its essay question, “What was your biggest failure and what did you learn from it?” I remember considering not applying to that school because I couldn’t think of a failure to write about.

At the time, I was on the receiving end of a lot of attention and praise for never having failed (publicly at least). But now as an adult, I know the trap of living a life based on avoidance of failure. It’s no success to have reached all the goals that have been set for you, to have checked all the boxes other people have laid out as important for you, and then to look in the mirror and not recognize yourself. Or to have your body screaming in pain or exhaustion.

Having been there and done that, I have rediscovered the vital importance of failure. Not “achieving” failure as an identity, but being willing to fail. I recently gave a workshop to a group of engineers, consultants, startup founders, and other change agents interested in how groups of people grow and learn. It was based entirely on sound, voice, and music improvisation. Speaking in public and singing are among the top fears of much of the human population.

The name of the workshop was, “Play the Wrong Note: Daring Adventures in Learning, Failure, and Creativity.” The title actually refers to a specific moment in my life when everything changed for me. Those four words — “Play the wrong note” — were the four most compassionate words ever spoken to me by a teacher. No one in a position of authority had ever said, “Lisa, I want to see you break the rules. And I’ll help you.” It turned out to be the most loving instructions I ever received, and the doorway into an entirely new life.

It was about three months into my year-long training program in sound healing. A weekend workshop dedicated to the art of improvisation. I thought I could just observe and let the others do this improvisation thing, which was clearly for “those people” but not me. So I hid behind the teacher with my violin tucked under my arm, hoping he would not see me or ask me to participate in this bluesy, jazzy jam that was happening all around me.

And, of course, at that very moment, he turned around and pointed right at me. “You! Solo!” he said.

I had no idea what to play. I wasn’t into blues or jazz and had no reference point for what sounds to make. He could sense that I needed help, so he said, “Play the wrong note.”

My facial expression must have communicated the feeling I had, which was bewilderment. “OK. Play the wrong note,” I thought. “But … which one?” There were an infinite number of wrong notes I could play. How would I know which one was right?

He smiled and took my finger in his hand, and moved it to a random place on the fingerboard of my violin. “Play that,” he said gently.

I heard his instructions, but when I tried to play, my bow arm literally would not move. I was so hard-wired to play only the right notes – after daily practicing from age four – that my entire body would not allow me to play any wrong ones.

It was the perfect timing for me. I was ready. I had had a lifetime of good training, practice, and mastery. I was wired for success. But I had no wiring for freedom, fun, or failure. And at that moment, standing there, stranded, in the middle of a room with forty or so people making sounds, having a great time, and waiting for me to solo, I got it.

I could continue to avoid failure, or I could choose to grow into the unknown, and learn to love my fear.

Later that day, in the same workshop, my violin case fell off its chair and onto the floor.

I took it as a sign and stopped avoiding the failures that were wanting to happen for me. I closed my violin school a little over a month later. I started practicing — first in the privacy of my own home, and using my voice, not my violin – making sounds that were all “wrong” to my trained ears. I started playing again. Something I had not done in a long time, and maybe never on my violin.

The adventure that followed was a list of things I could never have planned for my life. I started playing only improvised music, in public, on a stage. I discovered hiking and backpacking. I went to the top of Half Dome and the bottom of the Grand Canyon. I started working at REI — the retail job I was never allowed to have as a teenager because I could earn more money teaching violin or staying home to practice. I won a gig as a gear tester and reporter for Backpacker Magazine, including a free trip to the Outdoor Retailer show in Salt Lake City. I discovered Thai massage and Breema bodywork, which led to traveling to three countries I would never have dreamed of visiting before: Bali, Thailand, and Laos. And through my practice of these forms of bodywork, I traded massages for studio days with a couple of artist friends. And I discovered that I could play with paint. Which led to a daily art-making habit. Which has (so far, in the year or so that I’ve been doing it) led to a juried show, a new blog, and a whole lot of new art supplies in my house.

Each of these actions brought up my feelings of fear. Each of these actions required that I choose a new response to fear — one based not in avoidance but in learning to move forward in the presence of feeling my fear fully, with love. I could not have written these down on a bucket list because I would never have let my imagination run that wild. Until I was willing to play the wrong note.

And not just once, in a workshop. It was about making a decision to bring the learning from that moment back to my daily life. To find ways to practice that willingness every time the opportunity came up. With each experience of moving toward fear — rather than away from it — I grew in my courage.

It started with music. Being willing to play the wrong note in my personal realm of expertise — the highest risk area because I held it so precious as my professional identity. And then it expanded. Not with planning, but as a natural consequence of being willing to be “wrong,” and have that be OK.

So this is my soapbox.

They are the skills of the maverick. The rebel. The free thinker. The one who creates.

And these are the skills we need now in medicine. We need physician-creators, physician-rebels, physician-artists, and physician-free-thinkers to take a stand for the heart of medicine. Your medicine.

No matter how long ago it was that you experienced your last failure — whether it was just this morning or decades ago or not at all — it is never too late to dive right in. Start practicing the F word.

Take it from a straight A student. Me.

Lisa Chu is a physician.  She is founder, Live Your Medicine: Responding To The Evolutionary Wake-Up Call To Remember Your Love, Your Art, and Your Medicine.

Providing health care to the poor: It's time to get creative

Doctors: Is it time to love the F word?
3 comments