In defiance of dire predictions, children haven’t been sent to workhouses and women haven’t been chained to utensils after the GOP gained strength in the House and the Senate. And Vivek Murthy, the unabashed Obamaphile, was finally confirmed surgeon general.

To be honest, I always thought the controversy surrounding Murthy’s nomination because of his stance on gun control was rather daft. Stopping doctors from pontificating over guns, such as the docs vs. glocks legislation, is like banning me from trying to convert Pope Francis to Hinduism. The legislation is a parody not just for its own sake, but because what it seeks to prevent is parody as well.

Murthy’s first challenge is to raise the position of the surgeon general from that tokenism of a career U.N. bureaucrat to something vaguely useful. Which means Murthy must resist the call of banality, the banality of ideology and the ideology of making all of mankind’s imperfections public health problems.

I have the utmost respect for public health. However, public health professionals are at risk of devaluing their work by expanding their dominion and inviting futility. For example, some public health scholars opine that income disparity is public health’s responsibility since disparity signals social injustice, and low income is linked to poor health outcomes. Not only is such a stance moral posturing and laden with ideology, it is prescriptively useless. I cannot imagine Goldman Sachs employing an MD-MPH to ensure that the bonuses doled out are syntonic with Rawl’s distributive justice.

Making health the ultimate good rapidly disintegrates into absurd logical conclusions. I am much perturbed by the events in the Middle East, as are many others, to the extent that it affects my mental and spiritual peace (yes, that is health as well — check the WHO definition if you don’t believe me). Is the Middle East situation a public health problem for the U.S.? If so, should I turn to Vivek Murthy, the surgeon general of the U.S., to solve the root cause of this epidemic of anxiety?

Murthy must minimize his pontificating about societal ills that can tangentially be linked to the health of the nation, over which he has no more control than my jumping on the spot. The more he pontificates about these, the more he will affirm the cosmetic nature of the surgeon general.

That is he must make a distinction between problems affecting public health and public health’s responsibilities.

These include but are not limited to income inequality, anthropogenic global warming, the Keystone pipeline, unpleasantness of modern airline travel, gun violence, and the Second Amendment.

Yes, the Second Amendment. Time to let it go old chap. This is a problem of democracy and a problem for democracy, not a problem that will be solved by the medical profession. To believe otherwise is activism. And your position, sir, should be above the parapet of activism.

It is likely Murthy will be egged on by his supporters, including left of center well-meaning millennials. I would urge Murthy to be nonpartisan. The country is deeply divided, and perhaps a doctor can do what no politician and very few journalists have achieved — transcend politics and ideology. And a surgeon general cannot alienate 47 percent of the population.

Murthy should achieve the imminently achievable, however. Here is my wish list of initiatives or awareness programs that the surgeon general can spearhead.

1. Make kids play. Let’s call it Project Locomotion. Get kids to walk, run, scream, play, anything other than staring at video games and watching TV for countless hours. Let’s have a national “No Video Game Day” where all kids are outside doing what children have historically done, and still do in less affluent societies.

Childhood obesity is a public health problem. It is not a problem of poverty. Locomotion is free. It’s a first-grade of kids not being physically active enough.

Get your millennial mates, from colleges and universities across the U.S., to push this initiative at local schools. This will be infinitely more useful than their moral grandstanding about income inequality.

2. Keep kids off Ritalin. Say no to Ritalin. Too many kids are on Ritalin. We are medicalizing the broader coastline of normality. Let me tell you a little secret. Half of my first grade class would have been placed on Ritalin today. At the time they were labeled with that dangerous diagnosis: excitable children. Excitable children! Is that a euphemism for excitable children?

Don’t blame big pharma for the epidemic of ADHD. Big pharma is our servant. It gives us pills for what we can’t handle. If we can’t handle boisterous kids, pharma will happily oblige us with pills.

The number of kids on Ritalin in this country is not only a public health concern but a national shame. Kids need attention. They need to play. But most of all they need self-indulgent, self-absorbed adults to understand that kids will be kids.

3. Reduce antibiotic prescriptions. Too many antibiotics are prescribed frivolously. This is because too many doctors are too afraid, and too many patients, usually the half-informed with a college degree, conflate prescription with care.

Create a mass awareness campaign about the risks of antibiotic resistance. Make a macabre movie directed by Wes Craven about a flesh-eating bacteria that is resistant to all antibiotics destroying Upper East Side, New York.

4. Move Americans. Not by your speeches. I mean literally. Get them to walk more. Remind your fellow citizens what a beautiful country they are fortunate to live in, with the great outdoors, and well-maintained national parks. If it is the mall they must visit, remind them that even in malls they can walk more, from one end of the mall to the other.

5. Counter the charlatans. This is the raj of quacks. Half-baked information is accessible at the click of a finger. From anti-vaccination fear mongers to peddlers of nutritional supplements, fight them on the Fox network. Fight them on CNN. Fight them on MSNBC.

Use the gravitas of your title to discredit them.

To maintain your own gravitas resist the urge to comment on every single study that links some toxin found in miniscule quantities to a miniscule increase in the risk of cancer. Don’t cheapen your office by losing sleep over the dangers of anti-bacterial soap or germs on credit cards. Don’t worry. The Perfect Health Squad at the New York Times or Vox will cover these stories.

6. Exit with dignity. As you know the waste of resources in trying to extend life by 48 hours is preposterous. Create a bottom up campaign urging physicians to apply common sense when treating patients who are obviously in the last throes of their life. Rally the intensivists. Rally the primary care physicians. Tell people what a dismal epitaph it is to die in a CT scanner with the technologist yelling “take a deep breath in and hold it.”

If anyone accuses you of being a death panelist, refer them to me. Good luck in your job. I understand “Vivek” means wisdom. I hope you will bring a spot of wisdom, a touch of good judgment and an abundance of common sense to the position of surgeon general and to public health at large.

Do drug seekers in the ER make you burst out in song? It did here. 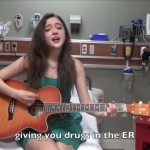 End-of-life care in America is broken at every level