The present time has one advantage over every other – it is our own.
– Charles Caleb Colton

The cherubic young man smiles from the black-and-white class photo. His open, relaxed appearance captures my attention. He sits on a wooden bench at the far right end of the front row, his sharp white shirt and patterned tie cinched tightly beneath his three-piece wool suit with the stylishly wide lapels. He looks directly at the camera and could not be happier. Some of the other young men in the photograph have spontaneous expressions, as though they are reacting to a story or a joke. Two lean together mid-comment while a couple of others look away from the camera. I study the young men and try to imagine their lives.

The class photo is one of dozens hanging in the hallway of the medical school. During a thirty-year period before the medical school moved from Marquette University to become the Medical College of Wisconsin, each graduating class sat in the entrance of the Schroeder Building on the Marquette campus. Although each photo is labeled with the year of graduation, there are no individual names. 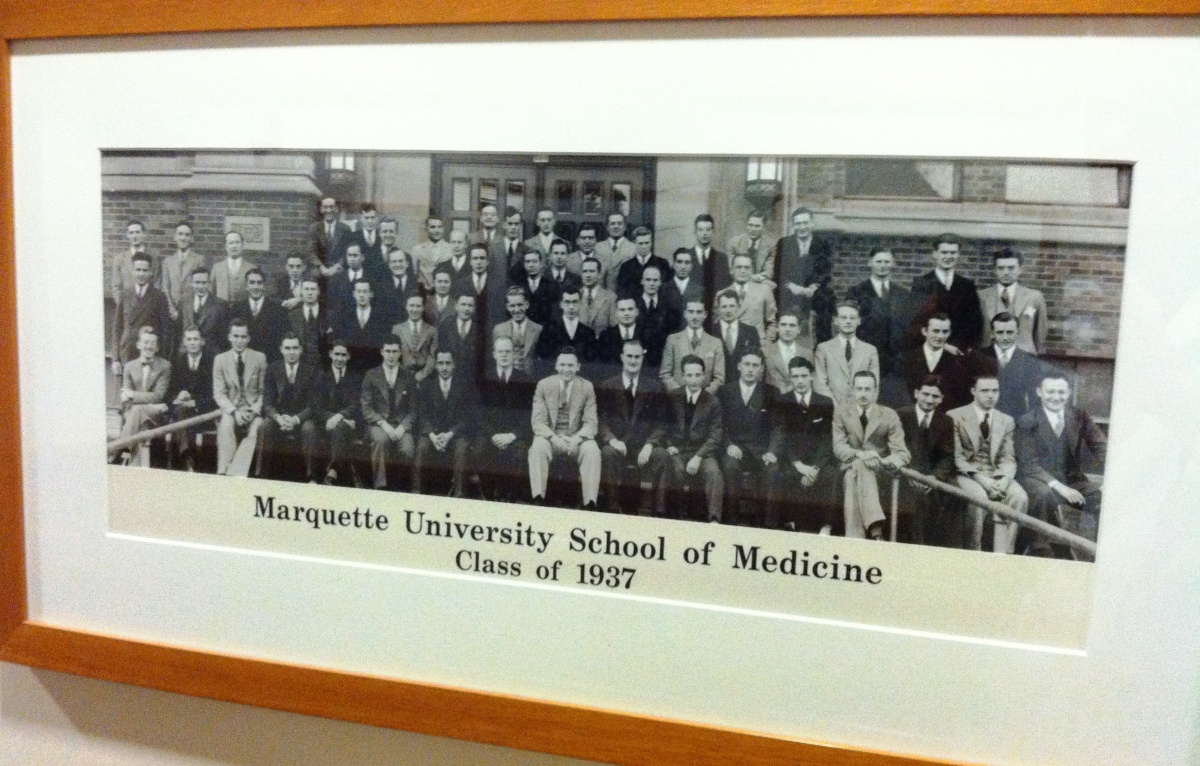 I spend a few minutes looking for details. I surmise that the photo was taken in the afternoon because there are no shadows and no one is squinting as they sit on the steps of the east-facing entrance. It is likely that they are taking a break from their studies and clinical work as they pose for their senior picture in front of the building where they have spent much of their past four years. As soon as the photographer releases them, many will likely run back up to the labs or lope down Wisconsin Avenue toward either Deaconess or Milwaukee Lutheran Hospital. For a moment in time, though, they are together as the camera captures the Marquette University School of Medicine Class of 1937.

I scan down the front row. Like four others nearby, the smiling student holds a cigarette between his fingers. None of the smokers seem to be trying to hide their habit from the camera. It will be 27 years before the surgeon general releases the report that definitively links smoking with cancer and 72 years before Marquette bans smoking from all of its buildings.

All of the students appear to be white males. Most will end up in general practice although an Internet search tells me that a few will go on to other types of careers. I recognize a serious-looking student near the left end of the second row. He will serve in Guam during World War II and later be appointed Dean, eventually overseeing the transition of the medical school from Marquette to the Medical College of Wisconsin. Another will be an advocate for reforms in the automobile industry, publishing a futuristic article about safe cars in the June 1955 issue of Popular Science with illustrations of padded dashboards, a collapsible steering column, safety glass windshields, and instructions for how car owners can install their own safety belts. 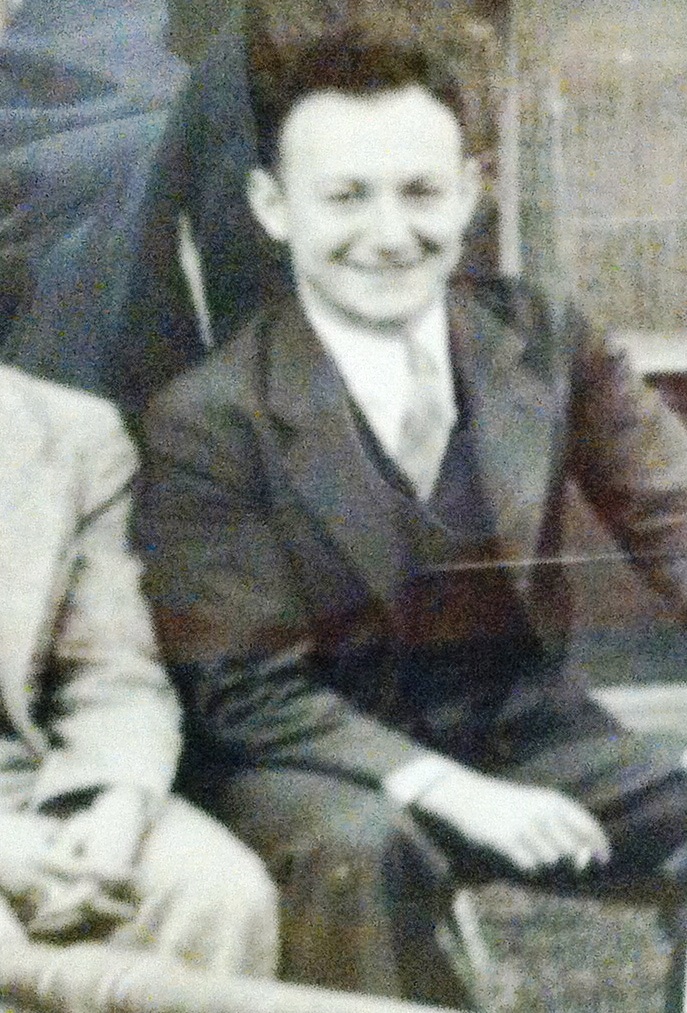 The young man in the front row who has captured my attention is anonymous to me. He leans forward, robust and healthy. His career stretches out ahead of him; I imagine he sees nothing but unlimited opportunities. He likely won’t think about retirement for decades. He and his sixty-seven colleagues, mostly in their mid-20s, have finally arrived at the threshold of their medical practices and they appear eager to get started. They are anchored in a different era yet their smiles, anticipation, and camaraderie link them to all students of every age.

What does the young man think medicine will be like during his career? The first antibiotic, sulfanilamide, was introduced the year he was a first year medical student although it will be five years before penicillin becomes available and the word “antibiotic” enters common parlance. Medical innovations including radiation therapy, wound management, fracture repair, resuscitation techniques, and public health interventions are beginning to develop. He and his classmates are still recovering from the Great Depression and it is safe to assume that each is aware of the worsening political climate in Europe.

These men represent medicine’s equivalent of “The Greatest Generation.” Compared to my peers, the men in the photograph have very few well-studied drugs at their disposal. Genetics and immunology are poorly understood. During their lifetimes, many fields including anesthesiology, oncology, and radiology will make enormous advances. Diagnostic testing in 1937 consists mostly of a physical exam, plain x-rays, and basic blood and urine tests. Toward the ends of their careers, the economics of medicine will shift and more than a few will probably lament the passing of “medicine as we knew it.” Social Security was only two-years-old when they graduated. Medicare and Medicaid were decades away.

I do the math and discover that these vigorous, long-ago young physicians, if still alive, would be around 100 years old now. Despite the distance over the decades, though, I also figure that many of them were reaching the end of their medical practices around the time I graduated from medical school in 1980. I do more math and realize that the Class of 1937 is only slightly more separated from me as I am from the young men and women who are applying for medical school today.

My curiosity about the smiling young man with the cigarette sends me back to the Internet. By comparing faces and hairlines in other class photos from Marquette’s yearbook, The Hilltop, I think I know who he is. He went on to marry, raise three children, and practice his entire career in Milwaukee. In 1954, the Milwaukee Sentinel recorded  that he bowled a 300 game in practice. How closely did we come to overlapping? He died of heart disease at 68 in 1975, a month before I was accepted to medical school.

I exchange one last glance with the young man sitting happily on the steps, wishing him well with his career and his life. As I do so, a group of current medical students heads down the hallway toward the doors that will take them to the parking lot. 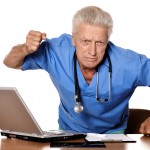 The giants of medicine: An appreciation
1 comments