Many healers, teachers and parents have them.

At one point, I did, too. I had delusions. I thought I was a hero, a rescuer clad in a shiny white coat and wielding the sword of clinical wisdom.

I look back on those days with nostalgia and regret. I wish they’d lasted a little longer — my belief in my own medical grandeur and invincibility.

My most memorable patient changed that for me.

I remember how her mother, Gigi, first brought Serenity to see me when she was a newborn. Gigi was fifteen; I was annoyed. Too much work for a pediatrician to make sure all the education gets through — after all, she was still a pediatric patient herself.

Then she was gone. She may have missed her next appointment or taken her baby to the health department for vaccination. If she came back to our clinic I didn’t see her, not for a while.

“Something is wrong,” he said. “The baby’s eyes are shaking, with no focus. I didn’t think it was okay.”

“Nystagmus is never okay,” I said. I felt annoyed — with the residents who must not have looked hard enough into the baby’s eyes at birth, with her mother who must have been too busy to notice that something was terribly wrong, and with myself for what I might have missed, all those months ago.

When I examined Serenity’s eyes, I saw no red reflex. This is the red “mouse eyes” reflection of light that you see with healthy retinas.

Not sure how that got missed, I thought. Did it get worse over time? Did Gigi not notice that her baby wasn’t looking at her face? Did she not look at Serenity’s?

I sent Gigi to the ophthalmologist to schedule cataract surgery for her baby. And we asked her to come back within two weeks, because Serenity was developmentally delayed: she wasn’t rolling over, reaching for toys, cooing or babbling.

This time Gigi’s mother came along too. She was pregnant with her sixth child, but doing her best to support Gigi, her firstborn, who seemed lost.

Talking to them, I said all the usual things: “Make sure that the baby gets lots of tummy time on the floor … read to her … don’t prop the bottle.” I could sense my words bouncing off the white walls, not getting through to Gigi or her mother. It was frustrating.

After that, I remember, I’d roll my eyes whenever I saw them coming for another visit. I had the answers about mothering skills, and enough theories to fix the baby’s delays. Why, then, their blank stares?

Three months and four visits later, when the pieces of my clinical puzzle kept falling apart, I asked the neurologist to help. His office worked Serenity in for an assessment a week later.

It took another week for his consult letter to reach my office. It stated that Serenity had “seizures, genetic abnormalities manifesting in a syndrome-like way, pending chromosomal studies, and was a product of a brother-sister conception. The biological father of the baby was mentally delayed. Testing her genetically as well is necessary.”

These black-and-white letters in my inbox on a Friday afternoon chilled the science out of my nicely stuffed brain. This case jumped right off the curve of my expectations.

When I had asked Gigi about her baby’s father, Grandma had said, “We prefer not to talk about it.” At the time, I’d thought her overbearing. The teenager had hung her head and looked away.

Now the neurologist’s report made the reasons for their reticence all too clear.

Fast-forward to the current year.

Serenity is almost two and is blind because her brain doesn’t process images. We found this out after fixing her cataracts. She has seizures and cannot sit up or say words. She smiles all the time and laughs when you call her name — or any name, as long as you sound happy.

The electronic prompt on the chart states that Gigi’s mother has adopted Serenity. Grandma keeps her appointments, asks relevant questions and loves her.

Today she walks into the exam room with two young ones: One grabbing her leg and a juice box; the other, Serenity in a carrier.

Recently we’ve been discussing placing a tube into Serenity’s stomach to feed her, because she is not growing.

“Look at her uncle! He’s already bigger than she is,” Grandma says and points to her youngest child running around the room.

I ask her about Gigi.

“She’s going to join the military,” she says proudly, a smile on her face. “She needs to take care of herself.”

I smile back, feeling sad and worried about everyone in that family. I wish I could be more like her — focusing on the good things.

Then I get up and examine Serenity.

Meanwhile, Grandma tells me how she stands all day, cooking at a fast-food restaurant, then comes home to a busy toddler and another who needs to be picked up and held.

One Friday afternoon, when nothing made sense, I learned that there’s evidence-based science, syndromes, social determinants of health and so many great articles in books and magazines. And then there’s a toddler, born to a brother and a sister and adopted by a tired grandmother who comes home to take care of her after a long day of grease and fries.

That was when my delusions began to fall away, when I began to learn that the best doctor I can be is a patient one, a sad one — for Serenity, for Gigi, for me and for the way things just happen sometimes.

Sarah Houssayni is a pediatrician. This article was originally published in Pulse — voices from the heart of medicine, and is reprinted with permission. 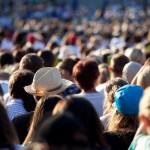