People have criticized the Affordable Care Act for amounting to a large transfer of wealth, from wealthy Americans to those not as well-off. But the real transfer of wealth has been from United States to other developed nations, whose health care costs we have subsidized for many years by paying so generously for many of our health care services. No better example of this comes to mind than the price we pay for pharmaceuticals in the US versus elsewhere. Below is a picture of what we pay  for brand-name drugs here compared to peer nations.

Pharmaceutical products are cheaper abroad in part because companies know they can make money in the U.S. market, and thus are willing to tolerate smaller profit margins in other countries. 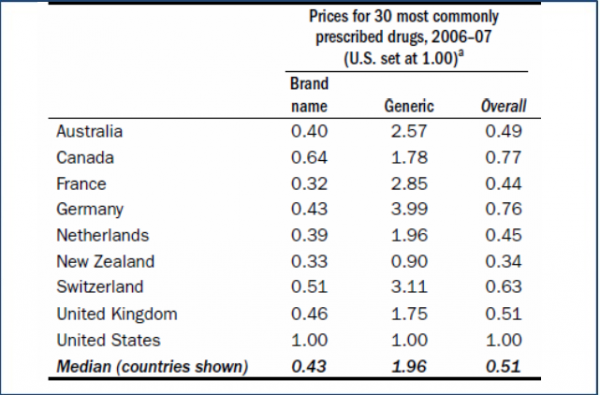 In effect, therefore, we are subsidizing the cost of health care in those other countries. And not just any old countries. Some of the richest countries in the world: like Switzerland and Germany. If we negotiated pharmaceutical prices more aggressively here in the U.S., the pharmaceutical industry might be more reluctant to accept lower prices elsewhere. More likely, lower prices in the U.S. would mean lower profits for the industry. This would undoubtedly have an effect on the willingness of pharmaceutical companies to invest in new products. Nothing promotes research spending better than the promise of future profits. It is worries about such research incentives that have caused some people to argue against negotiating lower prices with pharmaceutical companies. To lower profit margins, they contend, would be to slow down medical progress.

But is it the job of the United States to provide profits to the pharmaceutical industry, so they have an incentive to develop new cures? Is it people in United States who should pay for the majority of this research, simply because our friends in Europe are tougher negotiators?

It is time to worry less about promoting industry profits, and focus more on controlling health care spending. That means becoming tough negotiators, with hospitals, pharmaceutical companies, device manufacturers and the like. It is wrong to ask the American public to be sugar daddy to Western Europe.

New skill sets are raising the prestige of primary care

It is wrong to subsidize rich, European nations
8 comments