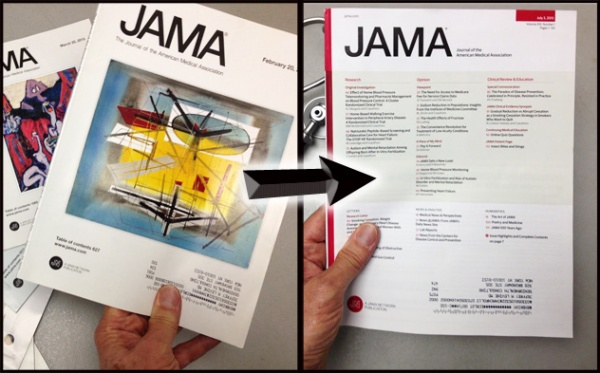 Beginning in 1964 the Journal of the American Medical Association (JAMA) started publishing full color images of art on its cover accompanied by insightful essays. JAMA’s former editor, George Lundberg, wrote that this was part of an initiative to inform readers about nonclinical aspects of medicine and public health, and emphasize the humanities in medicine. Now after almost 50 years of covers that displayed over 2,000 pieces of art, JAMA has taken a great leap backwards and replaced the cover art with a pedestrian table of contents. The cover art that once distinguished JAMA from an array of leading medical journals has been demoted to an inside page, eliminating one of the more visible, inspiring beacons that once linked the humanities to medical science.

The cover art was always important to me. As a teenager envisioning my future, I saw copies of JAMA on my uncle’s desk. He was a medical doctor, and for me the JAMA covers joined the visual arts to the science of medicine and gave me inspiration. As the years passed, I enjoyed seeing the distinguished covers of JAMA in medical libraries, and frequently picked them up to read the commentary. Glancing from the scientific articles to the essays on the cover art, my vision of the combination of art and medicine was validated. Over the years I received JAMA in my office and tacked many of my favorite covers to the wall by my desk.

The art swept across the vast panorama of civilization and human history. Just about any painter you can imagine has been featured on a JAMA cover. In addition the covers displayed Japanese Ukiyo-E prints (February 4, 1998), a 15th Century Apothecary Treatise (September 8, 1999), and African bronze statuary (April 6, 2011). One of my favorites was the photo of the Lewis Chessmen, a set that was carved from walrus ivory in the 12th Century and found in the Outer Hebrides off the coast of Scotland (February 16, 2011).

Some covers provided provocative visual imagery that accompanied an issue’s contents and reflected concern with public health and social issues. For example, in February 28, 1986 Van Gogh’s Skull with Cigarette was featured on an issue that compiled several articles on smoking. In November 13, 2002 a special issue on aging was graced by a painting by Minnie Evans, an artist who began to draw at age 43, then drew for another five decades. One of the most affecting covers was July 1, 1998 on an issue that presented the latest HIV/AIDS research. This cover was blank, and entitled A Cover Without Art. As written by the accompanying essay by M. Therese Southgate, “It is the blank canvas that reminds us of how much there is yet to do.”

The cover art made JAMA a beacon for humanism that shouted out its presence in a sea of technological advancement, and reminded us that medicine is closely intertwined with people and culture. In marketing terms, the revised cover represents rebranding not only of JAMA but perhaps of the medical profession itself. The change comes at a time when medicine sorely needs a touch of humanism, and rather than taking art away we need more of it.

But perhaps this cover redesign is symptomatic of a deeper culture change in the medical profession. Medicine is no longer in the realm of the private practitioner working as an independent problem solver, but instead has become a data driven, technology oriented business, and in a team environment the physician’s status has been demoted to “provider.” It is no wonder that the artist — representing an individual defining him/herself alone in a studio with brushes and paints — is no longer an appropriate symbol for the cover of a prestigious medical journal.

For over 30 years at JAMA, M. Therese Southgate served as Cover Editor, choosing them and writing incisive commentary on the work. These covers along with the essays were collected into books that you can find on Amazon. In an inspiring essay on her philosophy on art and medicine she wrote:

Medicine is itself an art. It is an art of doing, and if that is so, it must employ the finest tools available — not just the finest in science and technology, but the finest in the knowledge, skills, and character of the physician. Truly, medicine, like art, is a calling.

And so I return to the question I asked at the beginning. What has medicine to do with art?

In an editorial in the first newly redesigned issue dated July 3, 2013, the editor writes: “The goals of the redesign were to create an inviting, visually lively publication …” but the result does not fulfill this intention. There is more than a cosmetic issue at stake. JAMA covers have been the face of this medical journal for almost 50 years, endowing the profession with the face of humanism and social concern that it sorely needs. In an attempt to adapt to the future, lets not go back to the past.

The fallacy of billable hours

Solving the weekend effect for patients in the hospital

JAMA removes cover art, and why that matters
10 comments