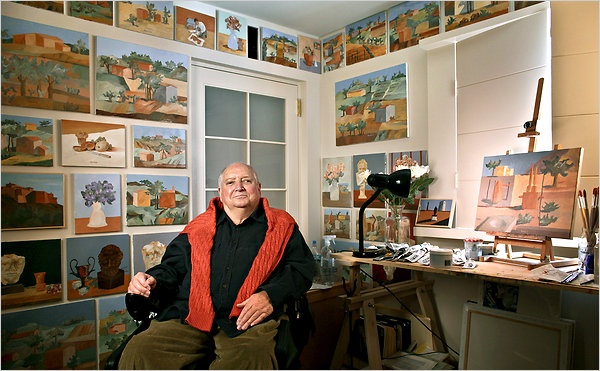 To designer and architect Michael Graves, paralyzed from a rare virus and in a wheelchair since 2003, the ultimate indignity came one day while he was a patient in a top-ranked hospital: “I was in a Hoyer Lift.” (a body sling mounted to a metal structure, used to help lift and move a patient). “The nurse was moving me from the bed to the chair, when another nurse came to the door and called to her friend, ‘Come on, it’s time for our break.’ After initially saying that she had to finish moving me first, my nurse changed her mind … and went on break with her colleague. So she left me dangling in the sling, midway between the bed and chair.”

For a moment hearing this, words escaped me. “What did you do?” I finally asked, horrified.

“My room was close enough to the nurses’ station that I was able to call out and eventually get somebody to come and help me.”

Yikes. I can’t imagine the indignity to any human being, let alone the stark contrast in respect this represented for an internationally-renowned captain of industry. But for Graves, it was only one of many moments that would fuel the next chapter he’d embark on as a designer.

During long weeks in eight rehabs and hospitals following his sudden paralysis, Graves was appalled to find patient rooms too tiny to accommodate his wheelchair (rooms designed for people in rehab); faucets and plugs out of reach; and décor (a euphemism) that prompted him to blurt “I can’t die here; it’s too ugly.” (Though the lobbies and public spaces of these nationally ranked facilities, he says, were gorgeously outfitted in granite and marble). Graves decided to turn his designer’s eye to creating tools and environments that made sense for patients, as well as for those who take care of them.

I interviewed Graves some months ago, for how we need more simplicity and common sense in the way health care is delivered to patients. Who better to help us figure out the intersection of health care and design — design meaning common sense, frictionless user interface, form following function — than Michael Graves? With oodles of design awards, honorary degrees, a bunch of medals, plus libraries, resorts and company headquarters to his credit, (think the Swan and Dolphin Hotels at DisneyWorld, and scores of everyday products at Target Stores), he’s arguably the dean emeritus of how design can empower — or dis-empower — a patient.

Which brings us back to the day Graves was left dangling in mid-air. It’s a story he tells for one reason: to illustrate how important it is for a hospital to have a culture of care — and how egregious harm to body and spirit can occur when it’s absent.

“These workers aren’t bad people. I don’t blame them. They may have been trained medically, but they haven’t been trained in any culture of care.”

Graves points to how other companies work from the top down to create this unified approach.

Absent this level of attention, Graves says, Apple might lose a customer’s business. In a hospital, the loss can be much worse.

Graves’ better designs range from hospital furniture that’s easily moved, accessed and cleaned, to walking canes that zip into satchels. They offer a glimpse into a future where every person’s dignity and control is honored as a birthright, regardless of physical limitation.

“There’s a huge unmet need for products and services that help care for aging parents now and in the future.”

It seems to come down to consciousness — something Graves promotes by having new hires at his firm spend time in a wheelchair. As for the world at large, Graves’ story about how he was abandoned in a Hoyer lift, as wrong as it was on every level, is also indicative of the far more insidious harm that occurs when we devalue a person’s basic human dignity — or shrug when it happens. Bring up the subject of indignities suffered by patients, and see what stories come up — like a grown woman sobbing for a tissue at 3am because the bed table with the tissue box has been moved out of reach (and no one’s answering the call button), or a grandmother, asking to be taken to the bathroom, being told, “It’s shift change. If you can’t wait, you’re going to have to go in the bed.”

These humiliations, both large and small, degrade not just the person experiencing them; they diminish all of us.

To the legislators blocking Medicaid expansion

When I see young pregnant patients, I see potential and opportunity

How design can empower patients
9 comments