Don’t get me wrong, it’s huge to see patient safety evolving to be a front-burner issue. After beating the drum for years, the National Patient Safety Foundation and other groups are seeing progress, with meaningful use, electronic health records, pay for performance, and the patient-centered medical home.

Medicare innovation grants and the Partnership for Patients are chipping away at medical harm and 30 day readmissions. Empowered patients are test-driving their choices and influence though open notes, shared decision-making, lobbying and partnering. The first strides toward transparency are being taken.

But before we get too focused on metrics or dazzled by our success, here’s another litmus test with which to measure our progress: “What would Ken Schwartz think of that?”

Schwartz was a 40-year-old lawyer working in healthcare, married with a young son when he got devastating news: advanced lung cancer. It came from out of the blue: he’d smoked an occasional cigarette in college and law school, but he’d been living a smoke-free, healthy lifestyle since then.

When Schwartz wrote about his care in the Boston Globe, early on in the diagnosis and treatment process, it was about something much more elemental than technology or transparency:

… the nurse was cool and brusque, as if I were just another faceless patient. But once the interview began, and I told her that I had just learned that I probably had advanced lung cancer, she softened, took my hand, and asked how I was doing. We talked about my two-year-old son, Ben, and she mentioned that her nephew was named Ben. By the end of our conversation, she was wiping tears from her eyes and saying that while she normally was not on the surgical floor, she would come see me before the surgery. Sure enough, the following day, while I was waiting to be wheeled into surgery, she came by, held my hand, and, with moist eyes, wished me luck…

This small gesture was powerful; my apprehension gave way to a much-needed moment of calm. Looking back, I realize that in a high-volume setting, the high-pressure atmosphere tends to stifle a caregiver’s inherent compassion and humanity. But the briefest pause in the frenetic pace can bring out the best in a caregiver, and do much for a terrified patient…I cannot emphasize enough how meaningful it was to me when caregivers revealed something about themselves that made a personal connection to my plight. It made me feel much less lonely. The rulebooks, I’m sure, frown on such intimate engagement between caregiver and patient. But maybe it’s time to rewrite them.

Ken Schwartz died of lung cancer in 1995, less than a year after his diagnosis. But his legacy lives on in the foundation he started shortly before his death, the Schwartz Center for Compassionate Healthcare at Massachusetts General Hospital. Dedicated to strengthening the relationships between patients and caregivers, it also stands as a poignant testament to the power of the human touch, and human kindness, in affirming our basic humanity.

The power of touch

“The most important innovation in medicine to come in the next 10 years is the power of the human hand,” says physician and author, Abraham Verghese, in his TED Talk, A Doctor’s Touch. During this era of “patient-as-data-point”, Verghese believes in “the old-fashioned physical exam, the bedside chat, the power of informed observation”.

Before he finished medical school, Abraham Verghese spent a year on the other end of the medical pecking order, as a hospital orderly. Moving unseen through the wards, he saw the patients with new eyes, as human beings rather than collections of illnesses. The experience has informed his work as a doctor — and as a writer. “Imagining the Patient’s Experience” was the motto of the Center for Medical Humanities & Ethics, which he founded at the University of Texas San Antonio, where he brought a deep-seated empathy. He’s now a professor for the Theory and Practice of Medicine at Stanford, where his old-fashioned weekly rounds have inspired a new initiative, the Stanford 25, teaching 25 fundamental physical exam skills and their diagnostic benefits to interns. He says: “I still find the best way to understand a hospitalized patient is not by staring at the computer screen but by going to see the patient; it’s only at the bedside that I can figure out what is important.”

Here’s the catch-22: sitting at the bedside takes time … time that’s precious, and to be frank, unbillable. In the 18 minutes it would take just to watch Abraham Verghese’s TED talk, a physician could see two patients (and get paid for it). Nurses also are over-worked and time-deprived.

Ken Schwartz would probably nod his head. He was a lawyer, after all. He would get it: tough to make a business case for compassion. But imagine yourself tied to the bed by IV lines, staring at the ceiling tiles and wondering if you’ll live to see another day.

What makes a difference to the wounded and sick? Yes, good medicine is amazing science and phenomenal minds working hard to cure. However, let us not forget the small things: a warm smile, an ice chip, a warm blanket, a cool washcloth. A pillow flipped to the other side and a boost in bed. Holding a fragile hand while sitting by the bed of the dying in the deep recess of night. Jumping up onto a bed to do CPR … staying alive, staying alive … Chapstick and a damp mouth swab. A patient comforted, a smile, a deep breath and heartbeat from someone resuscitated. This was a bit of my job over the last few days. We all do this. Every one of us. And this is not even in our job description.

Maybe the incentives and payment widgets that shape and constrain a clinician’s time—and muddy the imperatives for “high-touch” care– need some doctoring of their own. Perhaps along with our agendas, laptops and business cards, we can carry this question into every aspect of our patient safety work this year: “What would Ken think?”

What really happens in a morbidity and mortality conference

Being a caregiver has made me a better doctor 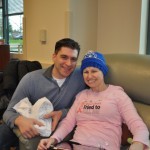