Injury to the brain continues to be a unique thing in medicine. These injuries are scary and unfamiliar to many health care providers. There is a finality to them. Their consequences are hidden a little bit; the asystole is easy to figure in the emergency room but the suppression and brain death isn’t something so easily recognized.

They’re what you might imagine, along with polytrauma, as poster child conditions for tertiarization and transfer to a higher level of care.

In truly catastrophic injury to the brain however, I’m not sure that’s a good thing.

My institution has had a small discussion lately on just what ethics and the law requires of us as a place with full neuro specialty coverage.

I’ll make up an example.

A 61-year-old man comes into a small community hospital’s emergency room. He was found down at home by his wife and last seen normal four hours previously. He wouldn’t wake up and he was breathing slowly and shallowly. The ambulance crew intubated him. In the emergency room his pupils are large and don’t react to light and he doesn’t do anything when the doctor hurts him. He’s in a very deep coma. If the physician working the emergency room felt comfortable doing a brain death exam, which he doesn’t, the patient might have some very primitive reflexes left but his condition is very serious.

A CT scan of the head is performed and shows a large bleed within the brain. 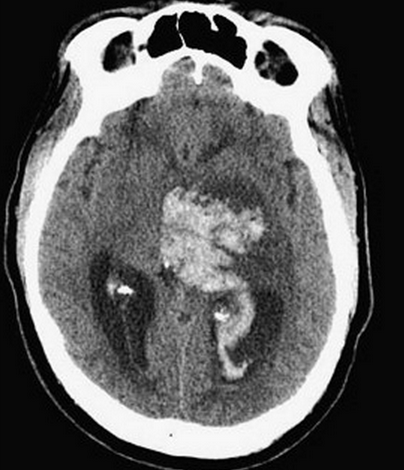 The bleed was probably caused by high blood pressure. In reality however, the patient’s condition is essentially terminal and the cause of the bleed isn’t important at this point.

The small hospital has an intensive care unit and an open bed. It however has no neurosurgeons, nor indeed even neurologists who round at the hospital. And so the physician in the emergency room starts trying to transfer the patient to a hospital where a neurosurgeon can see the patient.

There are really two issues here. The first is a legal issue concerning a law called EMTALA. EMTALA is a law that dictates transfers for higher care amongst hospitals that accept Medicare (virtually all hospitals). In very broad terms it puts responsibilities and requirements on both the hospital trying to transfer the patient and the hospital that might accept the patient. The former has a responsibility to stabilize a patient. They cannot refuse care in an emergency as a matter of lack of payment or inquire about payment prior to treatment to stabilize. Nor can they transfer a patient after stabilization merely as a matter of lack of ability to pay. The latter has a non-discrimination requirement, that specifically reads,

… a participating hospital that has specialized capabilities or facilities (such as burn units, shock-trauma units, neonatal intensive care units, or (with respect to rural areas) regional referral centers as identified by the secretary in regulation) shall not refuse to accept an appropriate transfer of an individual who requires such specialized capabilities or facilities if the hospital has the capacity to treat the individual.

Case law on the non-discrimination provision is scarce but in catastrophic injury, where no specialized intervention will alter the course of the patient’s condition, I would argue that the patient doesn’t require specialized care. And not merely cases where the patient is brain dead at the time of the transfer request but also in situations where brain death is inevitable or the condition is otherwise not survivable. The patient and family can proceed to comfort measures at any hospital, there is no specialization about such care.

The second issue is an ethical one. Do hospitals with specialized capabilities owe something to patients and families to transfer as a matter of finality and closure? In that we’re saying, “Watch, we did everything we could …?”

While I’m somewhat empathetic to such an argument I have trouble with it. I think it reflects a problem in both the expectations we have of health care as patients and how physicians are trained to deal with end of life. Really it is a shame for physicians to come out of training without basic palliative and communication skills. Even the physician in the small rural emergency room should have such a skill set. The capability to have an end of life discussion with families, even if the medical issue falls somewhat outside their scope of specialty.

I’m also somewhat disappointed in how some referring physicians appear to place priority in getting the patient off their hands over the patient’s well being. I’ve had cases where even after discussion with the consulting physician at an outside hospital and having seen the films and described in no uncertain terms to the other doc that the injury is not survivable that they continue to press for transfer.

I may be wearing blinders here but, and I think much of this is subconscious, I can only draw a single conclusion from such arguing. The continued pressure to accept the patient in transfer, after I’ve explained there is nothing to do for them, is a condemnation of my analysis of the situation. They’re basically calling into question my competency; my faculty’s compentency.

And I’m okay with that in the sense that I’m not going to take offense. What I have trouble with is they’re now trying to transfer their patient to a consultant who they don’t think is competent.

I don’t know how they can have the patient’s best interests in mind and work to transfer them to another physician they’ve basically said they don’t trust.

The issue gets more complex of course and I could continue writing. What if the patient was 6 months old instead of 61 years but the situation, in terms of the finality of the condition, remained the same? How many physicians on the line at the accepting hospital are literally too lazy to accept the transfer and work for any reason not to?

In general however, in an honest physician-to-physician phone call, with terminal conditions, where nothing will be done at the accepting hospital, no matter the patient’s age, I’m not sure transfer is a good thing. It significantly contributes to costs, provides false hope and contributes to our societal expectations at the end of life.

Colin Son is a neurosurgical resident who blogs at Residency Notes.

Can the fight against healthcare disparities be won?