Over the past twenty years, Wall Street business has covertly taken over the medical profession while doctors have been distracted by a deluge of procedural, financial, and legal paperwork. A strategic plan was launched to extract exorbitant profit benefiting business, and is now mainstream without challenge from our profession nor the public.

Legal boardrooms were abuzz in the 1990s as a blueprint assault was made against organized medicine, redirecting a profession into a commodity. Symposiums templated this game plan for hospital administrators, while lobbyists strengthened their legal foothold. Despite recognition of this onslaught in medical journals, the anemic response from physician leadership allowed it to sweep from east to west coast. Now occurring in California, I wish to shed light on this evolution using my experience at our small community non-profit hospital.

Ten years ago, we went into bankruptcy. Located in an affluent northern suburb of Los Angeles County, we were mismanaged, but business professionals were brought in keeping the hospital from closing. At this point, the template commenced.

Not being involved in hospital politics for 22 years, my election to the medical executive committee (MEC) three years ago probably rose from whistleblowing writings in a local blog. Within months, I was falsely accused of code of conduct charges and corrective action was taken against me. Renewal of my admitting privileges were withheld forcing me to hire lawyers preventing the board of directors from removing me from the medical staff. Many of my colleagues faced similar problems, some of whom are no longer on staff. To my surprise, when I told my east coast friends of this problem, they said it had already happened in their hospitals.

California law allowing medical staff self-governance was interfered with and trampled upon by the administration. I found staff meetings with administrators verbally abusive, prompting physicians to videotape these interactions. Not surprisingly, lack of communication at our hospital among the administration, board of directors, and MEC was sanctioned by a national oversight agency.

Medical reputations in the community were sullied by mudslinging, and we were marginalized by the undertones of spurious propaganda. There are some business people adept at this, while physicians are not. Anger by local doctors was temporized though as many have contracts with the hospital and must keep a low profile, especially since this administration was notorious for financially twisting arms and dangling the carrot to silence their voices.

The use of similar tactics to influence votes skewed the board of directors and created dubious conflicts of interest. One member had lucrative hospital building contracts, two had hospital money in their bank, and another did secondary real estate transactions on the hospital’s behalf. Four CEO-appointed physicians had profitable medical contracts with the hospital. One can see how easy a vote might be swayed. The administration used this influence to not only ramrod changes in hospital policies and procedures, but to persecute and prosecute any physician in their way. These tactics continue today.

The only voting member elected from the medical staff to the 15-member board was the chief of staff, and up until a year ago the deputy chief of staff could vote, but this was changed by the board at the behest of the administration.

Has this aggressive template business takeover made any improvement in quality patient care? Not at all, as this hospital still does poorly on national surveys. Then why pursue this onslaught? Profit. We have seen the salaries of all administrators continually increase, with augmented bonuses and concomitant contribution to their retirement plans.

Humanity has been replaced by the fiscal bottom line. Physician decision-making relative to patient care is threatened, and doctor advocates have been subjected to administrative crosshairs. At our hospital, physicians practice in a hostile working environment.

Ignorance is no excuse for not seeing this tsunami takeover of a worthy profession. If being a commodity must be the sacrifice of having excellent patient care, doctors would acquiesce. But with profit being the business motive, igniting the fire of public opinion against this clandestine assault of our profession must begin. 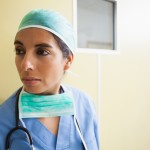 Is medicine a profession or a commodity?
28 comments