On April 15, 2013, my kids and I were in Stamford, CT, visiting with my sister, Precy, and her family. I had been reading when an email came up, stating a bomb had gone off at the Boston Marathon. I immediately turned to Twitter where #BostonMarathon had already started trending.

There before me, gruesome details emerged, coupled with some of the most disturbing images I had seen in over a decade. It all seemed so familiar, yet so different. Precy was sitting in front of the TV as the bomb blast played on a continuous loop. We sat, shocked, to see my city, Boston, become the site of a terrorist event.

Along with the rest of the country, I watched as people ran towards the affected area, good Samaritans and first responders, tending to the wounded. I watched ambulances pull up, followed the news as people were taken to surrounding hospitals, including my own, Massachusetts General Hospital. Despite the horror unfolding, I was proud of my city, its people, and my hospital community. We were working with a singular purpose, as Americans.

Over a week has passed since then and still, a sense of sadness has stayed with me. I am still trying to process it. As others have commented before me, it recalled the emotions that followed the attacks on the World Trade Center in New York City on September 11, 2001. At that time, I was on vacation, before my formal transition from fellow to attending at Memorial Sloan-Kettering Cancer Center. Precy had visited me then too, and we greeted a gorgeous fall day with the news of planes hitting the World Trade Center.

I remember feeling I had to do something. Surely, there were people hurt and they could use my medical skills. Hours later, my good friend, Lisa, a colleague from my residency at Yale-New Haven Hospital, had called; she too felt the need to do something. Armed with medical badges, we became part of an emergency medical crew stationed near Ground Zero—not first responders, but responders. We stayed for hours, hoping to be of help. But no one came. As night fell and we realized that there were no survivors, we made our way back uptown. A couple of firefighters asked us if we needed a ride uptown, an offer we accepted. They told us they needed to make one more stop at Ground Zero. And so, we saw firsthand the carnage, the smoke, the bent metal that the attacks brought to Lower Manhattan. Looking back, though, what stays with me is the image of papers littering the street, office supplies that looked like they were thrown out of windows. It looked nothing like New York. It was surreal; it felt like I had stepped onto a movie set where the end of the world was being staged.

As I looked around, I also realized why no one came to our makeshift triage unit and why there were no wounded, no survivors.

It occurs to me that the sadness that lingers with me has not so much to do with the bombing in my backyard city of Boston, but is more related to the impotence I felt on September 11th. It brought back the memories of the hope I had that people survived the planes crashing into the World Trade Center and the destruction, the needing to save someone and to feel useful, to give back to New York. It also brought back the memory that, ultimately, there was nothing I could do to help on that day.

On the Wednesday that followed the events in Boston, my family and I visited the 9/11 Memorial. We had planned this visit before we left Boston and it would be the first time I had been back to the World Trade Center site. Where once  there was smoke, dust, and the remnants of two iconic New York City skyscrapers now sits a beautiful and peaceful memorial park. I paused at one of the reflecting pools set within the footprint of one of the towers, read a few of the almost 3,000 names etched in bronze, and was overcome with emotion. 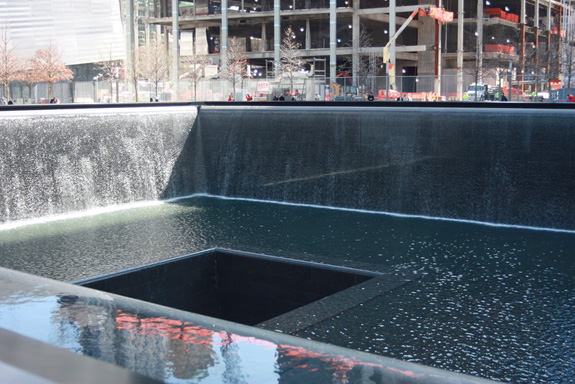 At that moment, I realized that as much as I consider myself a part of Boston, New York will forever be a part of me.

My thanks to Precy Goldstein, Lisa Fishman, and Terry Hourigan for helping me write this blog post.

How the silent exodus will worsen the doctor shortage