As an oncologist, perhaps the hardest part I play is as witness. I am there to give a diagnosis that, more often than not, will alter someone’s life forever. For some, I see resignation—a sense that they’ve known something was wrong and that it’s what they thought they had. For others, I see an almost immediate acceptance and, with it, perseverance; they are prepared to fight, to win. But for those where cancer comes without much warning, I see terror. Cancer is a threat to who they are, how they live, and yes—how long they have. It’s hard to see someone struggle this way, knowing that no matter how much time I spend with them, holding their hand, crafting a way forward, they leave my office with cancer.

I remember a patient who came in to see me years ago. She was in her early forties, living independently as a freelance editor*. She traveled frequently, had many friends across the globe, and lived close to her family. She was the type of person who would bring levity to any social gathering, the proverbial “life of the party”—until the bloating started. Weeks later, she was in an emergency room being told she had a pelvic mass and ascites. She had fluid drawn, felt better, and was discharged, with instructions to follow up with me, in the oncology clinic.

At that initial visit, she was joined by her sister. She looked scared, and it was clear she had been crying. After introductions, I sat down.

“Do you know what brought you here today?” I asked.

“Well, they told me I might have cancer, but that’s all I know,” she said.

With that, I reviewed what I knew. The fluid that was removed showed malignant cells consistent with uterine cancer, and the scans that were done showed a large uterine mass and tumors in her abdominal cavity and the liver. “I am so, so sorry to tell you this, but your cancer has metastasized; given the extent of the disease, clinically, you have stage IV disease.”

With that, she let her tears fall. I imagined she was thinking of this diagnosis as a death sentence, mourning a life slipping by her, the fear of a cancer death, of pain, and the lack of dignity. She was younger than me, and I could not help but tear up as well, at the unfairness of it all. I let her cry, pausing as long as it took. It didn’t matter that I had others in the waiting room. This patient needed to be here, and I needed to be here with her.

Ultimately, she recovered to ask about the next steps. We made plans to begin treatment with chemotherapy, hoping for the best. Each time I saw her afterwards, it would be the same experience. She would cry as soon as I walked in the room, and we would sit. She would regain her composure, and then, it was off to the infusion unit.

One day, I came in, and she was no longer crying. She didn’t look quite happy to see me—it was something else. She looked like she was at peace.

“You seem different today,” I said, with some caution. “Has something changed?”

“Well, Dr. Dizon,” she started. “My sister sat me down over the weekend, and we talked. She has always been more religious than me, and she really believes everything happens for a reason. I actually didn’t know where she was going with it; I mean, what’s the reason that I got cancer? No one knows that. But, she told me that I needed to let go; that all the tears in the world won’t give me clarity on the one question I need an answer to: Why me? She talked to me about acceptance and trusting that there is a higher power, that there is a plan. The plan might not involve me being alive in a few years, but there is a plan, and I simply cannot change it. We talked about how you are part of that plan—that you are here to help me survive for as long as possible—but that for me, the plan calls for me to live it.

“I don’t know how, but suddenly a light went on in my head, illumination in this darkness I’ve been stuck in, afraid and alone. With it, I realize that there is a world to experience: the sun’s rays, the leaves on the trees, the laughter of my nieces and nephews. I don’t know why I couldn’t see it, but I can now.”

As she spoke, I saw it clearly. She had evolved. Cancer was a medical condition that could be treated, for now. It did not define her, and it should not stand in the way of her life. She had started to let go, and with it, I saw a peace in her that I never imagined when we first met. We talked some more, and then hugged as she walked out of the exam room to her next treatment—face forward and smiling, for the first time since we had met.

Tips for applying to medical school in a pandemic [PODCAST] 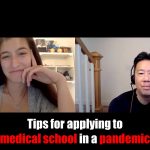 What are Moderna investors actually betting on?