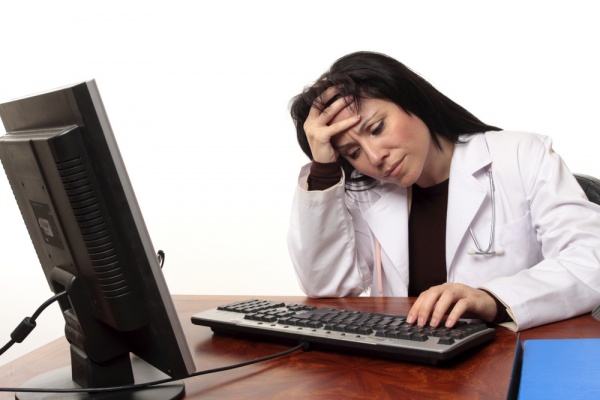 Today I’ve been feeling stupid. My job absolutely requires critical, creative thinking and the ability to focus well, which was really hard today. But I don’t think I’m actually stupid. I think it has something to do with the task at hand.

So this is how today went. I think it kind of explains the stupid feeling.

My morning shift started at 7:30am in a small but busy 45 bed hospital that serves a chunk of rural Alaska.  The night shift doc told me about the 13 patients who I needed to take care of that day. Seven of the patients were new to me, admitted the night before. For those patients, I needed to review their medical histories in the computerized medical record and get to know them, with a focused physical exam and an interview to determine what needed to be accomplished in the hospitalization. For all of the 13 patients, I needed to review all of the lab tests completed in the last day  and all of the radiological studies and check their vital signs and review the nurses notes about what had happened in the previous 24 hours. Each person had an average of about 30 blood test values and some of them also had microbiological results that needed to be reviewed.

There were an average of, I’d say, 20 vital signs per patient to review, since some of the patients were in the intensive care unit and had hourly blood pressures and pulses documented. There were inputs and outputs to be reviewed, which were relevant for about 60% of the patients. These data sets were a little difficult to find, and involved adding up numbers of milliliters eaten, drunk, pooped, peed and vomited to come up with an estimation of whether the patient was getting dehydrated or fluid overloaded. On each patient it was important to review the medications that they had been prescribed. This averaged maybe 12 medications per patient since many had been prescribed medications that they might need if they couldn’t sleep, or poop, were nauseated or were in pain. Every day I find a medication on one of my patient’s lists which is inappropriate in some way. I discharged 5 patients. For these I needed to fill out a medication reconciliation form to make sure that the medications that they took before they came in were reviewed and re-started if they were needed, and that any new medications given in the hospital were continued, if needed. I needed to write prescriptions for the new medications.

They also needed things like oxygen and wheelchairs and that sort of thing, and these needed to be checked by the insurance specialists to make sure that they would be covered so that the patient wouldn’t find that something that was unaffordable was the thing that they needed in order to survive at home. I had a meeting with all of the nurse manager type people, and nutritionists and physical therapists and social workers to discuss all of the patients, which took about a half hour. I had two new admissions to the hospital and for this I needed to walk to the emergency department, about 5 minutes away if I really moved, to see and evaluate the patients. One of these came in at 9am and the other at about 2pm. The admissions involved discussing the case with the emergency room doctor, reviewing the computerized chart, including past visits, imaging studies and labs if relevant, reviewing paper chart materials from referring doctors and from the emergency department, vital signs, interviewing and examining the patients and then writing and entering admission orders which included all of the things that I wanted done to the patients for the hospitalization including diets, medications, physical therapy, imaging tests, vital signs and activity.

I dictated notes on all of the patients I visited, discharged, admitted, concisely recounting all of the relevant data I had reviewed, the patient’s history, the physical exam, family history, social history, a review of systems and then my interpretation of the problems and my plans for solving them. Discharged patients needed excellent notes so that their primary care physician would be aware of what had happened. I also answered 12 phone calls about patient care issues, visited the radiologist to review x-ray results, transferred two patients from the intensive care unit to the general medical floor, talked to 6 family members, and had 3 conversations about life and death issues including new diagnoses of cancer and HIV and end stage heart disease. I did 5 bedside ultrasounds, observed 2 echocardiograms and a carotid duplex exam performed by the radiological technician and discussed patient care with 4 referring physicians. I called the pathologist twice for incomplete results on the man with cancer, got the out to lunch message once, busy signal the second time and then forgot to call again before the end of the work day, which potentially will delay the man’s hospital stay by a day. Everyone who needed to be discharged needed discharging at the same time, and the people in the emergency room needed to be admitted at the same time as the people needed to be discharged. At this very same time sick people were having things happen which required measured and creative responses from me in order to continue to progress in the direction of good health.

I felt most stupid when I was dictating my reports. A good dictation includes about 10-15 elements depending upon what it is for, and helps me focus on what is going on with the patient. It is also really difficult for me because I am a very visual person and would do much better if I could see what I was writing rather than have it disappear into a recording device. Even if I take copious notes during the day I always feel like my dictations are missing something important.

But even if it weren’t for the frustrations of dictating into a telephone, it is abundantly clear why I should feel stupid. My job is objectively impossible to do well. As an article in the Wall Street Journal puts it, “Multitasking makes you stupid.”

These are very distinct activities and are, of necessity, done either simultaneously or in quick and random succession. I was reading some of the data on multitasking and I do realize that what I do decreases my efficiency and creativity due to the extra time and brain power required to change gears so often. I love every little part of my day, but I don’t necessarily love trying to do all of it at the same time.

For me, heaven would be doing what I do, but one patient and one activity at a time. I would also like to get rid of at least half of the individual pieces of data, vital signs, labs, that sort of thing, and a large portion of the medications, to reduce risk of side effects. I would like to train my computer to present data to me in a way that I can best perceive it, without having to jump from page to page. I would like to see the notes I write as I write them.

It is possible to reduce the data that drowns physicians, and it would probably significantly improve our quality of care. It is possible to make our computer systems present data in a way that doesn’t confuse our brains. I’m not at all sure, though, how to make patients who are sick simultaneously respect a physician’s need to do tasks one at a time.

Quiet moments are a precious and rarely appreciated gift