I recently went to the American College of Physicians Chapter Meeting in Seattle and came away with a lot of great information, including a significant change in immunization of adults against pertussis (whooping cough).

When patients need a booster of tetanus immunization, we often give it in combination with a vaccine to protect against pertussis. As you may know, tetanus is a life-threatening infection by a bacteria that can cause severe muscle spasms and lockjaw. Immunization boosters for tetanus (Td) are given every 10 years to prevent the life-threating tetanus infection that can causes severe muscle spasms and lockjaw.

The Tdap (tetanus-diphtheria-acellular pertussis) vaccine is a combination vaccine that helps prevent both tetanus and pertussis and has been typically given to patients aged 11-64 when they were due for their next tetanus immunization (if they had not received it yet). 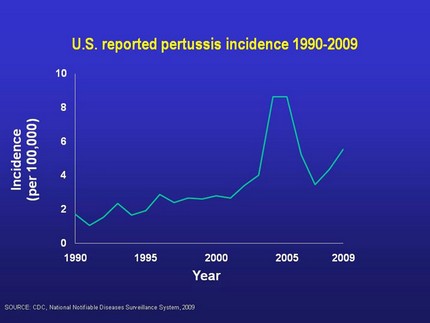 Unfortunately, we are seeing a rise in whooping cough.

In California, there have been more than 6200 cases and 10 deaths related to pertussis. It is also on the rise in other states. Often, it is grandparents and siblings that pass on pertussis to infants. For this reason, the recommended age group receiving the Tdap shot has broadened. Although the Tdap is not approved for adults 65 and older, research has shown that these vaccines are safe in this age group. Also, there is no longer a required interval between the Td and the Tdap vaccine (which used to be 5 years).

Haggling with your doctor about the costs of care

The Tdap vaccine and the rise in whooping cough
4 comments