I told a friend what I did recently to get in to see a dermatologist and she was shocked.

“You wrote a letter asking her to take you as patient?” “Wow!” “Yes,” I admitted. “I’d called her office for an appointment; she wasn’t taking new patients; I needed to resort to an over-the-top approach.”

You see, I’d researched her (ok, I Googled her) and after reading her background, schooling, and patient reviews, I really wanted her as my doctor.

So, just like high school kids in the college application process, I decided to plead my case, in written form. I told her who I am, what I do, and why I need her. She must have appreciated my unique approach, for I got a call from her staff telling me to come in, in a week’s time.

When we met, she told me other potential patients have waylaid her at school bus stops where her children (and presumably theirs) gather, but she had never gotten a letter before.

I found her everything I hoped for. First, she gave me the most thorough skin exam I’d ever had (even combed through my hair in segments to find hidden skin problems), and she never rushed our meeting, spending 30-40 minutes with me. I’d confirmed with office staff—beforehand—that I’d be seeing her—and not a physician’s assistant (no offense to those, but I wanted the doctor, especially for my initial visit).

My former dermatologist (to whom I’d gone for 25 years) had retired abruptly, and I found myself scrambling to find a replacement. The doctors my friends raved about were “not taking any new patients” (blame the high incidence in my state of older Irish people with problematic skin; I figure in that group). So, I had no choice but to launch my campaign.

My first realization of just how important these people are came in 2002, when I was diagnosed with breast cancer. I found out during a routine mammogram. The radiologist took the proactive step to ask me if I had a surgeon (as I stumbled about in a daze). When I said “No,” she pressed a card into my hand with the name of a surgeon she trusted. It was that action on her part that set me on the successful course I followed.

Over the next two years, I had 5 surgeries, and today, eight years out, I continue cancer free. My doctors have pretty much all been named “Top Docs” within my home state, and I bother to know such details. I owe my life to the wonderful surgical talent of one (who performed the mastectomy), as well as the reconstruction wizardry of another. My plastic surgeon made me whole again, when I had little motivation to “Go forward.”

I was so impressed with my doctors, I honored them in my story “I Got the News All Women Dread,” in which I detail my journey through diagnosis, mastectomy, and reconstruction. It appeared as the Cover Story in Providence Journal’s “Lifestyles” Sunday magazine, December of 2004. I wrote it to demystify a process that often terrifies, giving patients hope.

But if our specialists have been critical to our well-being, the most important person, today, among all our doctors is our primary care physician. He’s the lead conductor of our multi-talented medical orchestra, a young man who has a healthy respect for his patients and youthful energy (he’s still in his 30′s). I like that, since I’m of an age when I don’t want to “break in” another.

It was he who detected my husband’s carotid artery problem (husband called it “corroded,” which turns out is an apt description), setting him up with a vascular surgeon. His former primary care doctor completely missed it, though it was 98% blocked, a serious omission since the broken neck my husband suffered last April (in an auto accident) might have signaled his death, if that artery hadn’t been cleared. 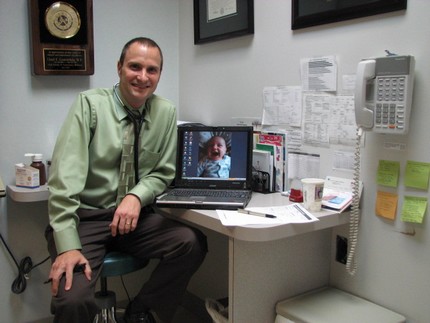 Dr. Lamendola starts out asking questions, pumping information into his laptop computer graced by picture of his 3-month-old son Nathanael (Biblical name and spelling). Next, he examines us. All of our specialists (and we have many) have already sent copies of reports to him (we’ve instructed them to do so). In this way, he acts as the personal medical warehouse we’ve all been led to believe is coming. He interprets test results with a clear idea of helping us manage present health problems, while avoiding future ones.

In the last analysis, Biddy suggests: Choose your primary care provider with particular care for he/she is the central cog in your important team of health providers. There’s a reason they’re called primary care: An excellent choice here can spell the difference between life and death. How do we know? My husband’s living proof.

Colleen Kelly Mellor blogs from the perspective of a chronic patient at Encouragement in a Difficult World: Biddy Bytes Blog.

Medicare rates will be influenced by comparative effectiveness

$11,000 hospital bill from the emergency department