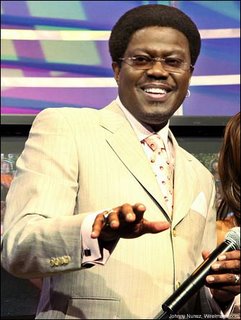 He had been recently hospitalized, and as recently as two days ago, it was reported he was stable and responding well to treatment. What happened?

There is very little medical information to go on. It was known that he had sarcoidosis, a multi-system immune disorder that primarily affects the lungs. The overall death rate from this disease is less than 5 percent, and generally caused by the consequences of progressive disease, rather than an acute event.

This leads me to believe that his death was less likely to be related to the sarcoidosis, but rather due to the pneumonia itself. This shows the seriousness of the oft-overlooked, yet common, community-acquired pneumonia.

Most cases of pneumonia that require hospitalization respond to antibiotic therapy within 72 hours. About 10 to 15 percent do not, and if Bernie Mac was admitted to the ICU, the initial failure rate reaches as high as 40 percent. These “non-responders” have a significantly higher mortality rate.

Possible causes for a non-response include an atypical or drug-resistant bug, or unusual pathogens (like fungi). Concurrent diseases in the patient, like cancer, heart, lung or neurological disease, also increases the non-response rate.

The overall mortality rate for hospitalized pneumonia is 8 percent. In those who do not respond within 72 hours, this jumps up to 25 percent. Bernie Mac had a prolonged hospital stay, suggesting that he did not initially respond well to antibiotic therapy. This fact alone gave him a much cloudier prognosis.

What could help? Vaccines for one. Studies have shown that people who obtain their pneumococcal and influenza vaccine have better outcomes in cases like these.

Although pneumonia is common, it can be serious. Unfortunately, sometimes it takes the death of a relatively young celebrity for the media to remind us of this.

Robin S.: A marriage made in heaven