A satirical response to “An open letter to radiologists from a jilted orthopedic surgeon.”

“I feel as though there is a deepening rift between our two specialties.”

You ask why the chasm has widened between our specialties. Well, maybe if you paid attention to me, you’d know. I’m an introverted radiologist, you’re a domineering surgeon, and neither of us specializes in communication. Our marriage – like an arthroplasty – is artificial, and it’s starting to crumble (likely from particle disease, although infection cannot be excluded).

So now what? Do we commit (arthrodesis) or break up (amputation)?

“It is perpetuated by the belief among orthopedic surgeons that your reads are often superfluous.”

These words don’t help. My life coach says it’s healthy for couples to fight fair, but not if you’re a finger pointer. My work is superfluous? Hey, I could nag about your plica cowboys or your spine genies (you know, who magically change patients into Transformers). But I won’t.

“You no longer whisper sweet nothings into Epic.”

Yes, that’s true. I once worked at “dressing up” my reports. And I totally knew your type.

You hated fat reports. So, I trimmed them.

You balked at reports accessorized with East coast, ten-dollar words. So, I cut them.

You raged at reports with incidental non-musculoskeletal findings, like lung nodules. So, I minimized them. (Sorry if you’re jealous of me looking at other body parts, but I had a life before “us,” which included staring at testicles and breasts and everything.)

But you know what? You never said my reports were pretty. So, I stopped. Why should I get all gussied up for a big day at the monitor when no one notices?

First, you never say where you’re going. Next, you send blurred intraoperative images for me to guess where you’ve been. Finally, you expect me to clean up your mess with a few attractive words. Some days, I’m so busy cooking and cleaning reports for your blurred images, I don’t know which end is up.

Lately, it seems like I can’t say anything right. So, I keep my reports brief and dumb: That’s how you like them, isn’t it? But now you don’t even like that!

I’m not happy. While you’re out gallivanting through the halls ­– probably having the best time ever as all the hospital minions bow to their surgical god – I’m stuck at the monitor: alone.

You used to stop by my reading room. You’d pull up a chair, and we’d sip coffee from those wonderful Styrofoam cups. We’d gripe that the administrators were vultures, that we were the talent, and that we should open our own hospital. But then, you stopped visiting. In fact, everyone stopped visiting. It’s depressing. Doesn’t anyone want to see my new glow-in-the-dark coffee mug?

When your group bought a magnet, I knew it was only business. But when you outsourced cases to those university sharks … well, that really hurt. You know, those academics may be smart, but do they have glow-in-the-dark Star Trek coffee mugs? I have two.

Full disclosure: I’ve matched on a website with some new doctors. They’re not orthopedic surgeons, but at least they appreciate me.

Like the sweet old rheumatologist who has me review his hand X-rays, knuckle by knuckle, as he methodically questions pre-erosions at every joint. Or the thoughtful hematologist, who assigns me every skeletal survey (15+ films per case) in his practice, each case worth nearly an RVU.

“We are disappointed with the growing lack of enthusiasm in your reports.”

As for why radiologists say, “overlying cast limits fine bone detail,” tell me, why do you painstakingly explain procedural risks to patients until their dogs feel properly schooled to scrub in and assist? You already know the answer: It’s the lawyers.

“… you just might reignite that old spark between us.”

But I still respect you, and I want to meet you halfway. We just have to remember why we’re here: to prepare our little guys (and when I say little guys, I mean 90 year olds with ramshackle joints) to face the world with minimal searing nerve pain.

So, if you’re still in, then meet me at the top of the Empire State building on Doctor’s Day. I’ll be wearing the Teletubby lead apron.

Alan Weissman is a radiologist.

Why health care delivery is an exceptionally different industry: Why does it matter? 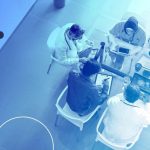