From a medical perspective, ‪Mr. G’s case seemed straightforward. His GFR had fallen. His kidneys were failing. Dialysis would be required as the best treatment for his renal condition.

When I met with Mr. G later in the afternoon, he was in despair. He could not see how dialysis would save his life and expressed anguish towards the idea of living the remainder of his life on dialysis. He deliberated declining treatment. In private, he wondered if there was any point in still living.

This was not the reaction I expected. From the medical team’s point of view, they had saved ‪Mr. G’s life using all that modern science and technology had to offer. But to Mr. G, he believed he had been delivered a death sentence.

I asked Mr. G why he felt the way that he had. He told me how he had just retired and was looking forward to traveling with his wife.

For Mr. G, life had meaning not in its extension as an end in itself, but because of what was possible within the confines of life. He looked forward to an active life. I expressed sympathy for ‪Mr. G’s disappointment. Yet I also expressed to Mr. G that human life would be a very tragic thing if the loss of traveling deprived it of all its meaning. Mr. G was now confronted with a reality he could no longer alter, but only endure through a renewed philosophy of life.

I asked Mr. G what was truly most important to him. He told me about his wife and his children. I asked him whether traveling could even be meaningful without his wife’s company, to which he replied no. And I asked him if he could still cherish the love of his wife and children despite being on dialysis. He nodded his head. This was enough to continue living.

“I love life,” he told me the next day. “I want to live. I want to keep going for my wife and for my children.”

Watching the warm glow return to Mr. G reminded me of the essence of what being a physician is.

This conversation and the ensuing human connection, more so than the miracles of dialysis, opened the window of hope.

A few days later, I met another patient, Mr. D, who was admitted for a heart attack. His left main artery had been occluded, a condition often termed as “the widow maker” due to its poor prognosis. Mr. D was presented with the option of placing a stent in this artery and or also bypass surgery. The medical team and the surgical team assumed that Mr. D would choose bypass surgery given that the literature suggested that surgery would on average lead to more years of life. And so, there was unrest when Mr. D turned down bypass surgery to receive the stent. Once again, the medical team saw its role as to extend life for as long as possible and saw its identity threatened when that function was rejected.

I went to speak with Mr. D. He expressed to me that as a 69-year-old man, an extra couple years of life did not mean so much to him if he were to be compromised by the surgery, which he believed as an elderly patient, he was at risk for. Furthermore, he revealed to me that he was a widower. His wife had died of pancreatic cancer a few years ago. He told me how he had learned to accept mortality and meet it with courage and dignity through his wife’s cancer.

“My wife found out she had stage 4 pancreatic cancer. She sat me down that very evening and told me very matter of the factly that this was the hand she was dealt,” he told me. “We ended up enjoying more life in those last few months than we ever had before.”

As Mr. D continued, he told me about his strained relationship with his son. He could not bear the idea of dying during the surgery without seeing his son again.

“I am OK with dying in a few years as long as I make mends with my son. I can’t go into surgery with the thought that I might never talk to my son on good terms again”.

When I shared my conversation with the team, my team began to see Mr. D as not just a myocardial infarction, but as a distressed human being who happened to have had a myocardial infarction. This bridge allowed our team to connect with Mr. D in a more compassionate manner and affirmed the team’s role as healers, even as we stepped outside to follow what the evidence suggested in a vacuum.

It is common to hear of patients feeling invisible, as if nobody is paying attention to them. Modern medicine is really good at giving patients tests, prescriptions, and procedures, all very important in keeping humans alive. But the profession only reaches its full potential when it uncovers the underlying reasons which motivate someone’s will to live. Taking the time to acknowledge a patient’s humanity, and to let them know they are heard and seen matters in this regard. Through my interactions, I found that if I listen hard enough, each patient has a sacred story to share, and it’s these stories that form the basis of human connection and trust. It’s these stories that exemplify the human condition, of which we, as physicians, are so privileged to bear witness to and be a part of.

Being a neonatologist and a mother [PODCAST] 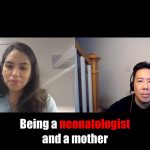