“The nipples are equal and reactive” is a phrase I came across in the physical exam section of a note that I had dictated, courtesy of my Dragon.  I have a Dragon.  Not a cool Game of Thrones dragon, heroically swooping in at a critical moment, but a program that recognizes my voice and transcribes it into comically broken English in my patient’s medical record. At times, my Dragon has me screaming into a little dictaphone attached to my work PC, “ex-TREM-uh-tee!!” over and over.  It is a marvel of modern technology for real, but … perhaps I mumble?

Trust me, I do not fear change.  My hospital’s conversion to an electronic medical record was not met by my anger, resistance, or trepidation.  I actually find it an incredibly useful tool for doing all those doctorly things, like gathering some medical history, remembering the name of the patient’s spouse, making “helpful suggestions” under the doctor’s orders tab. I know those people.  The ones griping about how the EMR is stupid or is a conspiracy to get them to burn out and retire early.  But that is not me, I embrace technology.  When something is not working on my computer, I need only to turn it off and turn it on again.  I am not afraid to click an unfamiliar tab or button. These are the blessings of having a software engineer for a husband to occasionally bail me out.

Here is the problem:  I can’t type.  This is a hard admission, because, as a neurosurgeon I am supposed to be, I mean, I am, good with my hands.  I took that keyboarding class in high school (it was called typing) but in my teens, this skill seemed best suited to those who were destined to careers as “assistant to …”  I was planning to go to medical school.  The skill was a means to end.  I would type my applications and then, eventually, I would have my own assistant, right?  I skated through the course and got an easy A, but never mastered the skill.

No problem, though. I spent my residency years scribbling notes on paper and dictating.  Dictating was a skill I could master. Talk as fast as you can into a phone, and a real person deciphers it, whether you mumble or fall asleep mid-sentence, into a written document to proofread later.  Any time I told my very mature residency colleagues that I needed to dictate something, they would say, “You dictate funny!” and roll over laughing.  (Say it out loud using different accents and emphasis on different syllables, and you may find why a 20 something male might find this hilarious.) In any case, Jenny, the transcriptionist was unlikely to type “the nipples are equal and reactive” even if it sounded like that was what I said.

Introduce EPIC, the most robust EMR, revolutionizing medical records and putting thousands of transcriptionists out of work.  The notes in the EMR are so convenient!  One just makes a template and types in the history relevant to the individual patient.  Simple!  I may have mentioned that I can’t type.  My children even mock my right thumb only texting method.  Imagine my excitement when I was introduced to my Dragon, the solution to my typing inadequacies.   Now I can talk to the Dragon to fill in the blanks on the template.  Problem solved.

Sadly, my Dragon is intellectually challenged.  I know you can “train” the Dragon to recognize your unique pronunciations and accents.  Mine just does not get it.  I say, “follow up with me.” He says, “lobectomy.” I say, ”dizziness.”  He says, “and his anus.”  I say, “exacerbated.” He says, “masturbated.”  I say, “direct childcare.” He says, “erectile care.”  Not only is he slow, but he is also a pervert.  Speaking of slow, I can no longer dictate as fast as I can speak.  I must slowly enunciate every last syllable.  Sometimes I find myself leaving messages on voicemail or talking to actual people on the phone as if I was talking to my Dragon. “He … cannot … raise … his … LEFT … lower ex-TREM-uh-tee, period. New line …”

The silver lining is that it has encouraged me to learn new things, like using my left thumb while texting.   I have revisited the keyboarding layout and improved my keyboarding rate.  I type like I play the piano, though, staring at my fingers until I am forced to look at the music or the written text.  My fingers are consistently dyslexic,  every chair a “cahir” and every the a “teh.”   Now all of our notes are immediately released into “MyChart” for the patients’ review.  For my patients whose pupils are equal and reactive, they may find that while I was sitting in my cahir, shouting at teh Dragon, I entered something in their note about “viewing their images rectally.” 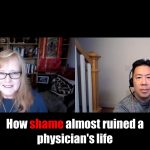 My Dragon versus my fingers: A weak dictator’s struggles in communication
5 comments