He was a healthy 36-year-old paramedic with a loving wife and an adorable little boy.

Jim loved his job. The rush, the adrenaline, the blaring lights through downtown hurrying to get to the major hospital. Cardiac arrests, gunshot wounds, tragic auto accidents, respiratory arrests, CPR, compressions, starting IVs. Speaking to the ER physician en route to the hospital to give stat meds for V-tach, SVT, delivering a baby. Anything and everything. Jim was there and ready for the next life-saving event.

COVID was rapidly spreading throughout the country. Standards and compliance with wearing masks were not always a priority. PPEs were also not readily available to health care workers. Jim was aware of the risks involved. But he was young and healthy. And in a hurry.

It couldn’t happen to him.

Jim developed a cough. A dry, persistent cough. And then he lost his sense of taste and smell. His energetic self became weak and lethargic. His temperature rose to 101.6. His manager said he must be tested for COVID. His test was done and processed urgently.

Jim had to be quarantined from work from his squad. At home, Jim stayed in a separate room. Away from his little son and wife.

Within one week of testing positive, Jim continued with his cough, but he became short of breath. His wife found him gasping for air in his bed, and she immediately called 911. His fellow paramedic partners picked him up. Put him on a stretcher, added oxygen, started an IV. His O2 sats were 82 percent. Jim was pale, gasping, and barely able to talk. He was rushed across town to the ER.

His O2 sats continued to drop. His wife held his hand. We love you. She said.

Jim was brave. And he replied: I’ll be home for Christmas. As he squeezed his wife’s hand.

Jim was intubated, a central line inserted. Nimbex (a paralytic) started along with a propofol drip. He was transferred to the ICU. IV steroids started along with his first dose of remdesivir. His blood pressure dropped dangerously. Levophed drip was started.

Week after week went by. Jim’s kidneys shut down, and now dialysis was started. The ICU nurses and physicians worked endlessly. There were no breaks—12 to 13-hour shifts. Jim’s nurses enter his room. Day after day. Shift after shift. Isolation Gown, gloves, N95, face shields, shoe covers. Grueling and hot and suffocating.

His wife, Mary, calls up. Needing a report of her husband. Her voice quivers. The nurse allows FaceTime with Jim’s wife and four-year-old Timmy. We love you. She says. And all she sees is Jim on the ventilator with a distant stare of no comprehension. She leaves pictures Timmy drew for his dad at the hospital’s front entrance. Jim’s ICU room walls are covered with pictures of Christmas trees and Timmy’s handprints and hurry home, daddy.

The intensivist calls for a conference with Jim’s wife. We’re sorry. We are not making headway. He’s deteriorating. COVID has destroyed his kidneys, his lungs. MRI shows minimal brain activity. Despite everything we have done.

His wife bows her head. A tear stings her cheek as she remembered his grasp of her hand: I’ll be home for Christmas.

When coaching physicians with wellness, don’t lead with mindfulness [PODCAST] 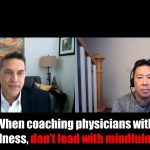 During the pandemic, many health care workers won’t be home for Christmas
1 comments