Some people have high cholesterol but not much atherosclerosis. We think of their arteries as having nonstick surfaces. We know inflammation can predispose to plaque formation and plaque rupture, which is the trigger of most heart attacks.

We know statin drugs can prevent and reverse plaque buildup, and make existing plaque sturdier and less likely to rupture. These drugs lower blood levels of inflammatory substances. Most doctors focus on their cholesterol-lowering properties, but they do many other things that may, in fact, be more important than lowering levels of bad LDL cholesterol.

We also know there are populations where even old people have very little heart disease and very little plaque buildup. Diet and physical activity seem to be a bigger cause of this than genetics. When members of such populations move and adopt the habits of a different culture, their heart disease risk changes in the direction of the disease levels of their new culture.

A new Teflon pan bought around the time I was born may have worked as well as mother’s well seasoned frying pan, but the nonstick chemical, polytetrafluoroethylene, has been shown to have carcinogenic, hormone-disrupting and pro-inflammatory effects. We all know that the nonstick surface of a Teflon pan isn’t indestructible. It ultimately chips, and we have ended up eating Teflon but also some of the not-so-healthy chemicals that are used in Teflon manufacturing, which can cause environmental damage as well as whatever they do to our bodies.

The chemicals in nonstick pans have changed recently, but they have not proven themselves to have long term safety, because only time will tell us about that, so we are all asked to be guinea pigs.

The cast iron pan from the same era is still serving me well, which brings me to what I wish we accepted as a universal truth in medicine:

Pills, even if they show good results in clinical trials, are chemical shortcuts, and usually, in the long run, less safe and effective than natural, lifestyle-based strategies that don’t involve putting man-made chemicals into our bodies.

Some people have advanced disease and radical, desperate measures are indicated. Others can’t or won’t adopt healthy lifestyles, and I agree that pills are probably better than nothing in that case.

But for primary prevention, what to say to a very healthy 66-year-old male with a ten-year cardiovascular risk of 9.6%, which is actually the best-case scenario, it’s hard for me to believe he should be on “moderate to high dose statin treatment,” which is the current guideline.

So what are the natural ways to prevent or reverse atherosclerosis?

A Mediterranean diet reduces heart attack and stroke risk by 50%.

And, this just in: People who train for and finish a marathon, even at their own pace, show decreased stiffness of their aortas, seemingly reversing four years of “normal” age-related change.

If our 9.6% risk male were four years younger in terms of his total cardiovascular risk after starting to exercise, he would be at 6.9%; that’s a 28% improvement.

Statistics like these really make you think a little harder about why our focus is so much on drugs for primary prevention of cardiovascular disease.

I think three forces are at play:

1. The time difference between prescribing a lifestyle intervention and a pharmaceutical one in a fifteen-minute office visit.

2. The power of the pharmaceutical companies over clinical research and publication and also over guideline creation.

3. Americans’ desire for quick fixes and overconfidence in numbers like LDL levels.

But two out of three is enough to keep me trying to do my best.

A medical student graduates with a lack of closure [PODCAST] 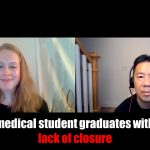 Incremental risk amid COVID-19 re-openings: What do we value most?

Consider the natural ways to prevent or reverse atherosclerosis
1 comments