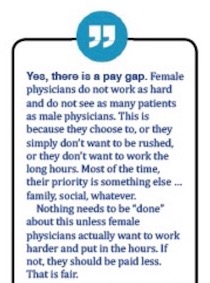 The pay gap between men and women has been a subject of interest recently, particularly in 2018 reports by Doximity and Medscape.

Notably, the gap favors men, is not explained by obvious factors such as hours worked or choice of specialty, and does not seem to be improving. In-depth studies published in the medical literature have examined the relationship between gender and compensation taking into account a wide range of potential confounders, including clinical and academic productivity, leadership roles, age and experience of individual physicians, and place of practice, and found that these factors also do not completely explain the reduced compensation for women in medicine. Further, there is evidence that women may deliver improved care in some contexts, such as caring for women with cardiac disease or decreasing 30 day mortality in certain hospitalized patients.

Yet antiquated perceptions of the value of women in medicine persist. In this month’s Dallas Medical Journal, readers were asked to respond to the question, “Do you believe that a pay gap exists?  And if so, what is the cause”? One physician replied, “Yes, there is a pay gap. Female physicians do not work as hard and do not see as many patients as male physicians … Nothing needs to be ‘done’ about this unless female physicians actually want to work harder and put in the hours.”  Another said, “I feel the pay gap between female versus male is because of hours worked, specialty and location.” [Note: the issue has been retracted due to the protest against these comments.]

The author of the first comment has been soundly criticized on social media. However, his views about women and their capability and role in medicine are not unique: They have been echoed by many others in this and earlier conversations. It is likely that many people are ignorant of the role of bias and discrimination in the gender pay gap, but it seems fundamentally unhelpful to highlight them. Giving a platform to these voices moves our field backwards, and suggests to the public that medicine is a field stuck in a bygone era.

Nevertheless, the Dallas Medical Journal’s blunder gave us an opportunity to get to some fundamental questions. Why do health care organizations and journal editors still not know that the question to pose is not whether a gender pay gap exists, but what to do about the established pay gap?  How can we help health care leaders understand the pay gap as well as other types of gender and maternal discrimination in medicine and the associated negative sequelae on the medical workforce? When will a critical mass of leaders in health care be inspired to allow our field to engage meaningfully in the long term, dedicated work it will take to devise and employ effective, system-based interventions to reduce current compensation gaps and prevent future gaps?

Women physicians  — like everyone — will thrive in settings where they are equitably hired, supported, advanced, and compensated. If we wish to optimize the care we give our patients, we will seek to eliminate the clear inequities persisting among physicians.

4 reasons why physicians will become extinct 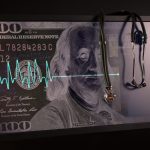 A day in the beautiful life of this doctor 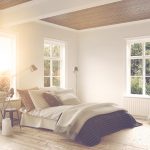 The antiquated conversations on the gender pay gap
10 comments