One of the most difficult things I deal with as a physician is patients’ demands for pain medications. I treat patients with cystic fibrosis, a genetic disease present at birth with no cure, and its issues are indeed complex. There are legitimate causes for misery from the chronic coughing, abdominal pain, and joint pain recognized as common symptoms of the disease.

But the associated issues of depression, stress with family, and money make giving out narcotics problematic. There is also intense pressure on a physician in the CF community, as there is in many other practices, to retain your patients. Having a patient leave you for another provider is painful, and feelings of failure and a sense of letting somebody down pervade.

Treating pain and relieving suffering are an inherent part of what is expected of us as healers. The Hippocratic oath was written in 400 BCE, and is one of the most enduring and momentous codes of ethics ever written. The Yale University version of the Hippocratic Oath explicitly mentions relieving pain and suffering in the third sentence. As gatekeepers of medicine, it is within our power to both give and refuse potent medicines.

My perspective on pain medications is similar to that of many of my colleagues in mid-career. I attended medical school in the 1990s, when the whisper that physicians weren’t treating pain turned into a thunderous roar. Pain became the fifth vital sign, no longer a symptom but something as important to a patient’s life as their heart rate and blood pressure.

Unfortunately, somewhere along the way something bad happened. Really bad. The country got hooked on pain medications. We turned into a nation of pill poppers, and when that got too expensive for people, heroin came back. The stories of drugs ruining people’s lives began to show up not only in arrest reports, but also in obituaries. There was simply too much access to these drugs, and the country was clearly suffering. Many addictions could be traced back to a single prescription for a narcotic for a tooth removal or after a minor surgical procedure.

With the drug overdoses piling up, the medical establishment began to take notice. The pendulum had swung too far to the side of easy narcotic prescriptions. At the same time, data began emerging that opiates were not an effective treatment of chronic pain. We were doing more harm than good with these drugs, and the medical societies began to act. In 2016 the CDC came out with new guidelines highlighting the importance of attempting to limit the use of narcotics for chronic pain.

But making a change in practice patterns overnight is never easy. It is a process. The CDC guidelines were not a recommendation to switch from using one antibiotic to another for a pneumonia, or to use this blood pressure medicine instead of that one because of side effects. These changes got very deep into issues of relieving suffering.

Recently I had struggled with the help versus harm conflict of prescribing opiates these issues. A few of my patients began asking for opiates for their chronic pain, and asking insistently. As usual, their situations were complex. They had real reasons for pain, but mixed up with them were depression, a chronic illness, and sometimes a history of drug abuse. I tried to steer them to non-opiate pain relievers, as well as yoga, exercise, and counseling to help treat them. They looked at me like I had asked them to grow a third eye.

I was confused about my role as healer. Pain has been described as the physical sensation of discomfort, while suffering is the story we tell ourselves about the experience. There was no doubt my patients were suffering, but I wasn’t convinced pain medication was the answer.

I took my concerns to a seminar on the psychological aspects of cystic fibrosis. When it came time for the question-and-answer session, I was ready.

“What should I do when my patients ask me for pain medications, and they aren’t indicated, and I think they’re going to do more harm than good? I’m afraid to lose them to another center, or have them get their meds off the street. Wouldn’t it be better just to treat them in a controlled setting?”

The speaker looked me in the eye. “Michael,” he said, “you simply cannot compromise your principles for fear that somebody is going to reject you or buy illegal drugs off the street.”

He elaborated, but that first statement was all I needed. They were the right words at the right time, and put everything into perspective for me: Decide if you think the medicine is going to do more good than harm. If you don’t think it is, then you simply do not prescribe it. You cannot sacrifice your ethics for fear of rejection, and what that patient decides to do from there is not your responsibility.

Since then, I’ve had patients hate me and leave me. I know most of the time they are going to another provider and getting what they want, or, worse, going to the street to get what they want. Hopefully, sometimes they focus on other ways to ease their chronic pain. And sometimes I’m sure I’m wrong, and with luck, they do find the right practitioner to give them what they need — I’m not a pain doctor.

The elephant in the room is that we don’t have a great answer for the millions of Americans who suffer from chronic pain. It doesn’t seem as if opiates are our answer. I still do prescribe opioids occasionally, but try to keep it short term, constantly evaluating if the patients are more functional or less functional on their medications. But I’ve gotten away from the mindset of prescribing for chronic pain, and psychologically I’m back in line with being able to say no. And with that, I feel like I’m back in line with another part of the Hippocratic Oath: to abstain from doing harm.

How can patients get better if they live in homes tailor-made for disease? 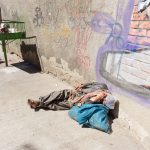