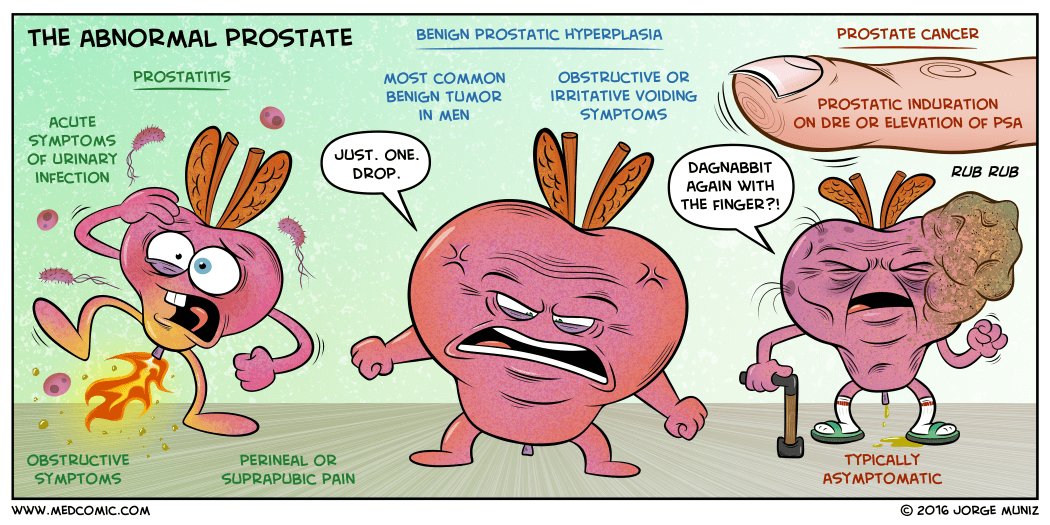 In this Medcomic, we’ll visualize three common abnormalities of the prostate.  Let’s meet our new friends. On the left is Burney and he could certainly benefit from a trial of antibiotics and an analgesic. The large fellow in the middle straining to urinate goes by the name of Turp. On the far right is Grampa Addy, currently dealing with the stresses of a slow-growing adenocarcinoma.

The normal prostate is a rounded structure with a median sulcus between two lateral lobes. It encircles the urethra just inferior to the bladder. The ducts of the seminal vesicles join that of the ductus deferens to form the ejaculatory ducts, which pass through the prostate and open into the prostatic urethra.

Turp is experiencing compression of his prostatic urethra due to benign prostatic hyperplasia (BPH). It is the most common benign tumor in men. The enlargement of tissue results in the obstruction of urine flow, causing urine retention. Symptoms of obstruction include hesitancy, straining to urinate, slow stream, a sensation of incomplete bladder emptying, and postvoid dribbling. There may also be irritative symptoms such as frequency, urgency, and nocturia. Medical therapies include alpha-blocking agents, 5-alpha-reductase inhibitors, and transurethral resection of the prostate (TURP). Yes, Turp needs a TURP.

Adenocarcinoma of the prostate is the most common noncutaneous cancer in American men greater than 50 years of age. Patients are typically asymptomatic. Obstructive voiding symptoms are usually due to BPH, but obstruction may also occur if the tumor has invaded into the urethra or bladder.

Grampa Addy was found to have an area of induration on digital rectal examination (DRE), as well as an elevation in serum prostate specific antigen (PSA). The diagnosis should be confirmed by biopsy. Treatment options for localized prostate cancer include radical prostatectomy, radiation therapy, and active surveillance. Hormonal therapies and chemotherapeutic options are generally reserved for locally advanced or metastatic disease. Grampa Addy may be grumpy, but his prognosis is good. More patients die with prostate cancer than they do because of it.

Jorge Muniz is an internal medicine physician assistant, illustrator, and author of Medcomic: The Most Entertaining Way to Study Medicine.

Why paying doctors more is a win-win 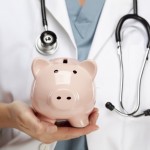