It’s not always obvious. Sometimes patients register with a chief complaint like “headache.” They tell the nurse their head has been hurting for months and deny fevers, etc. They get put in a room, and when you take the history, there’s nothing remarkable until you ask just the right question:

“So, what do you think is wrong? Are you worried about anything in particular?”

“Well, I think it’s probably the plate they put in my head.”

“You have a plate in your head?”

“Why? Were you in an accident?”

“Well, I was abducted, and I don’t remember much, but I know they put a plate in my head and are using it to send me signals through the TV.”

And suddenly everything is much clearer.

When I was a resident, I had a long conversation with a patient like this one. He wanted a CT scan (he’d already had several), but he didn’t really need another negative CT scan. So we made a deal:

It was a good deal. And I was sure the proof of the absence of a plate would help him a great deal. But then after the x-rays didn’t show a metal plate, he still wouldn’t concede that it wasn’t there. And he broke his end of the deal and left without speaking to a psychiatrist.

I had a similar situation with a gentleman who came in with the primary complaint of “parasites.” If you’ve worked in medicine long enough, you know this is a very, very bad sign.

He was extremely insistent and animated as he detailed the changes in his bowel habits and large white worms in his stool. And then he showed me the stool sample he brought with him (which patients with parasitosis frequently do) and on his excrement was a rolled up piece of toilet paper he claimed was a worm.

Delusional parasitosis is incredibly difficult to treat. But, as this was my first experience with a patient like this, I was undaunted. I was certain I could prove he didn’t have parasites with logic and generous reassurance. But my faith was for naught. He refused any sort of psychiatric evaluation and even though he’d already had numerous courses of anti-parasite medications, I relented and gave him more.

I have heard of a patient who gouged out his own eye because he was convinced there was a worm in it. It is very hard to get these patients the help that they need because they distrust anyone who doesn’t believe them!

One of my favorite adages is, “A person with an experience will never bow down to a man with an argument.”

People who have profoundly experienced the presence of God in their lives will never be convinced by arguments against His existence. And people who hear messages from their TV or see worms in their stool will never believe it’s not true. Experience is a powerful, powerful thing.

In medical school, we’re taught to ask questions like, “Are you hearing any voices?” and, “What are they saying?” This seems awkward until a patient matter-of-factly tells you that he does hear voices, and they are saying very, scary things.

Command hallucinations are scary. Imagine hearing a voice say, “Just kill yourself. You can do it. Do it now.” That would be seriously disturbing.

It is both frustrating and sad that it can be difficult to get people who are mentally ill the care that they need. To ensure inpatient psychiatric treatment, I have to sign my name to a legal document stating that the patient is a threat to himself/herself (or others) OR is unable to care for himself/herself and is imminently in danger. Which isn’t always easy to say. And when I do sign that document, I take away that person’s right to leave. If they try, they can be forcibly returned to the ED and restrained. Kind of a big deal when you think about it.

This part of my job is easier when patients say things like, “I’m thinking about slitting my throat with a kitchen knife.” Of course, suicidal ideation with a plan is unsettling, but in a horrible weird way, the clarity of words like these is a relief. When I leave the room, I can sign that legal holding document easily and without hesitation. A guard shows up. And then a super long waiting game begins.

The supply/demand for psychiatric care in the U.S. is sorely mismatched. Suicidal patients can be stuck waiting in a room in the emergency department for more than 24-hours because beds at psychiatric hospitals are so limited. Options are much, much better for people with insurance, but money doesn’t buy a bed that is already filled.

That legal document only holds people for 72-hours. So usually, suicidal people are back out on the streets three days later. I once took care of a man the local law enforcement knew well. He had been mentally ill for a long time and had made more than one attempt on his own life. They treated him like the boy who cried wolf. I committed him to a psych hospital for the last time before he successfully killed himself. I felt more mad than sad when I found out. I felt like the system failed him.

The majority of mental illness is treatable, but not curable. In the ED, my treatment is usually limited to a “B-52” (Benadryl, plus Haldol 5 mg, and Ativan 2 mg) which helps agitated patients sleep through their wait for transfer to a psych hospital.

It can be fascinating to listen to florid psychotics rant about demons, entertaining to talk with manics about their grandiose adventures, and heartbreaking to hear suicidal patients detail their losses. But for the most part, in the emergency department, I don’t have time. Emotional factors are a giant can of worms — and there isn’t an ED doc in the country that has time to go fishing during a busy ED shift.

But despite time constraints and therapeutic limitations, I am grateful for the opportunity to extend a hand to people, who at rock bottom (or the middle of a storm), see the lit red letters of the Emergency sign as a lighthouse.

People are people — whether manic, suicidal, or delusional — and it is a privilege to care for them.

A surgeon conquers her anxiety. See how she did it. 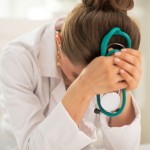 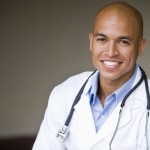 People are people — whether manic, suicidal, or delusional — and it is a privilege to care for them
3 comments