So here we go:

It was the same situation that I had been in dozens of times.

Well, not really. I mean, I was only a third-year medical student on my second rotation. Dozens = possibly more than once before. But by the time I wrote this, I was already an expert at pretending I had done something many more times than I’d actually done it.

I was on night call during my medicine clerkship and was sent to the emergency room to see a possible new admission to our team.

Everyone else on the team had something better to do, and they were sick of babysitting me.

The patient was a man in his forties with severe abdominal pain who had first been seen by the surgery and GI services and judged to not have an acute abdomen.

The guy had just been dumped on us.

By the time I saw this gentleman, he had been in the emergency room hallway on a stretcher for over fourteen hours, in terrible pain. In my short white coat and clutching my notebook of history and physicals and progress notes, I tentatively approached him.

This was my poetic way of saying that I knew I was going to annoy him, and I assumed he was going to get pissed off.

I could see the dread on his face, and it was very clear he had no desire to have me ask the same questions he had been asked repeatedly by people who were unable to give him any answers.

“Are you kidding me?” the guy snapped at me. “Now they’re sending a high school student to ask me more of the same questions? Don’t you people know what you’re doing?”

While I tried to think of what I could say that would not upset him further, I knew that I, as a medical student, had fewer answers than anyone.

“Um,” I said. “Can you tell me when your belly pain started?”

The guy stared at me a second, then rolled his head away and refused to look at me.

I consulted my little notebook. “What makes the pain better?”

“When you go away and leave me alone.”

I managed to take his history that evening.

… and I followed him while he was on the medical service. His abdominal pain turned out to be benign,

“Sorry,” I told him. “We’re still not sure what’s causing your abdominal pain but we don’t think it’s anything serious.”

“Why am I not surprised?” he retorted.

… but his labs were suggestive of type 2 diabetes. We started him on an insulin regimen with scheduled follow-up appointments as per routine.

We spent $20,000 of hospital bills to diagnose him with something his primary care doctor should have diagnosed him within one office visit.

Also, in retrospect, why were we giving him insulin for early type two diabetes?

On the day of his discharge, I came to his room to ask if he had any questions, but instead of asking me questions, he thanked me. He said that he had been ready to walk out of the emergency room when I had arrived. He brought tears to my eyes when he said that my attention made him feel that someone really cared and was working to get him better.

But I never actually explained the cause of the patient’s abdominal pain aside from saying that it was benign.

One morning during the patient’s hospitalization, I walked into his room, and he was smiling. “My belly pain is gone,” he told me.

His wife, who was by his bed, told me, “I went to the store and I bought this laxative, because I remembered the night before he got sick, he ate a lot of steak and I thought maybe he was backed up.”

“I pooped so much last night,” the patient informed me.

“The toilet was clogged when I came in here this morning,” the wife added.

“And now I feel completely better,” he said.

In summary, my personal statement was about a patient who had a $20,000 work up for constipation, which was only cured by his wife bringing him a laxative from the local drugstore.

And that’s why I want to be a doctor.

“Fizzy” is a physician who blogs at A Cartoon Guide to Becoming a Doctor and Mothers in Medicine. 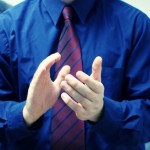 Fighting high health costs.  Because I can.