She seemed awfully angry and at the very least dubious that I couldn’t do more for her father. After 7 hours of surgery trying to salvage her father’s leg, I tried patiently to explain that this new (third) bypass we had just successfully completed was unlikely to provide her dad with a long-term solution. Ultimately, he would lose the leg, if we were lucky he’d have it for another year or two. Accounting for the “unlucky” side of the coin was even more depressing; immediate wound or graft infection, a postoperative heart attack from the liter of blood I had just lost or early graft failure which few surgeons would attempt to reverse given the tenuous nature of the graft to begin with. I didn’t have the heart to mention these things too, she was already upset.

It’s conversations like these that make me feel like there is something intrinsically wrong with the way we conceptualize modern medicine, and by “we” I mean both doctors and patients. I worry that a much deeper issue — a larger social construct — plays a role in decision making and influences treatment choices because it obscures the limits and boundaries of what health care can provide.

I chose to become a surgeon largely because I couldn’t stand the inadequate feeling that I had while managing chronic illnesses like COPD (emphysema) and diabetes. My ego loved the idea of taking a patient with a problem that was fatal if left untreated (like appendicitis) to the operating room and just fixing it.

Turns out there were a lot of other things I liked about surgery that mattered more so when I chose to become a vascular surgeon I fully understood that I was committing to a career of palliative surgery. Of course there are some exceptions — the 65-year-old man with an abdominal aortic aneurysm for example — but for most patients I am merely rearranging the deck chairs on the Titanic. I know I don’t have the solution for peripheral vascular disease — it’s a systemic problem and by the time a patient sees me, he has a lot of it. My job is to take out what I can or go around it, but I am certainly not fixing it.

In 1991, Joanne Lynn and David DeGrazia wrote a brilliant paper about the “fix-it model” of medical decision making. In it, they posit that contemporary attitudes about medicine subscribe to a mental model whereby disease is defined by a deviation from normalcy and the role of health care is to provide an intervention that “fixes” or returns the patient to normalcy.

Although most medical decisions do not fit this model, it’s hard to deny its influence on both patients and physicians. Consider the vast use of coronary stents in settings outside acute myocardial infarction or the widely-viewed animated video parody “orthopedia vs anesthesia” with the infamous line, “I have a fracture, I need to fix it.” While the need to repair a bone in a 97-year-old woman in asystole is preposterous, the video is funny precisely because it rings true.

Lynn and DeGrazia expose the hazards of this mental model for decision making particularly for patients with chronic illness and for interventions which have limited/no potential to return the patient to normalcy. Surprisingly few have recognized and championed their concerns. Notable exceptions include William Silverman in his observations about the care of extremely low birth weight babies and Mark Neuman in his New England Journal of Medicine commentary about the video parody. Both point out that the fix-it model promotes medical decisions that are explicitly permissive of intervention and that the model neglects a broader range of outcomes that are important to patients. As Neuman notes, “It’s as if, on some level, a decision making process has been passed over, and an inevitable operative course, however absurd, [has been] set in motion, not by the patient, but by the fractured bone itself.”

Recently, my research group has also examined the fix-it model. Over two years we listened to and analyzed nearly 80 conversations between surgeons and patients before high risk operations. Although we were looking to hear discussions about the potential use of life-supporting interventions postoperatively, we were surprised to find that surgeons routinely used language consistent with the fix-it model. Many actually used the words “fix-it” and those who didn’t, used words that certainly suggested something was broken and could be fixed. They described disease as something that was leaking, blocked or damaged and proposed interventions that would plug or patch, repair or remove the problem.

While surgeons used this imagery to explain the patient’s disease and the operation under consideration, they later transitioned to a more deliberative stance. In a few instances, the only reason cited to pursue surgery was to fix the problem and these conversations lacked any deliberation or reason to pursue surgery apart from having the problem fixed.

However, in most cases, the surgeons explicitly challenged the fix-it model as they deliberated in front of the patient about whether to pursue surgery — they noted that perhaps the problem was too broken to fix, or not broken enough to fix, or that maybe what was broken wasn’t actually the source of the patient’s symptoms. They also noted that while they could fix the patient’s presenting problem, the patient would not or might not return to normal after surgery due to complications, imperfect outcomes and the impact of surgery on the patient’s baseline health.

And this brings me back to my patient’s daughter. It seems only natural to me that we (surgeons and non-surgeons) use the fix-it model to describe both illness and treatment; it’s a good way to explain complex medical information succinctly (something that we believe promotes trust). But like all mental models, fix-it oversimplifies the situation, particularly for older frail patients with multiple chronic illnesses, where there is a broad range of possible outcomes and prolonging life for as long as possible isn’t necessarily the most important goal.

Assuming that physicians with good communication skills transition to a deliberative phase that attempts to dispel the fix-it model (as I’m sure it would be easy to find physicians who are not good at this), even in the best circumstances are patients able to make this shift after we have defined their disease as an abnormality that can be fixed? When you tell someone that there is no cure, or that additional interventions are burdensome and unlikely to achieve their desired goal, are you fighting a Sisyphean battle that was lost long ago in this deep conception of what health care is supposed to do? I don’t know, but the anger and disappointment in the daughter’s voice makes me think we are up against a firmly entrenched obstacle that will take a lot of work to overcome.

Gretchen Schwarze is a vascular surgeon who blogs at GeriPal.

Doctors are helpers, not healers

I may not accept your insurance, but I will always accept you 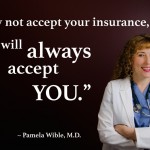