A year ago in a post about law school applications decreasing, I speculated about whether a similar phenomenon would occur with medical schools.

In that post, I commented on the impending problem of too many medical school graduates and not enough residency training positions. I cited an article that appeared in the New England Journal of Medicine in 2011 in which the CEO of the Accreditation Council for Graduate Medical Education predicted that by 2015 or sooner there would be more graduates of US medical schools than residency positions leading to specialty certification.

The data for the 2014 residency match have not been released publicly so the outcomes for graduates of US med schools are unknown.

However, the Educational Commission for Foreign Medical Graduates says that of the 26,678 residency positions offered, only 53% of US citizen graduates of offshore medical schools (US-IMGs) and 49.5% of non-US citizen offshore grads matched.

A look at the websites of two of the more prominent Caribbean schools, St. George’s University and Ross University, shows that most of their graduates who matched ended up in non-procedural specialties like internal medicine or family medicine.

St. George’s lists 760 graduates and Ross 783. (They take two groups of enrollees per year at different starting times.) St. George’s matched 22 (2.8%) and Ross 18 (2.3%) in categorical 5-year general surgery positions. To look at it another way, of some 1,200 categorical slots, 40 (3.3%) graduates of the two most well-known Caribbean schools are on track to become general surgeons.

Neither school listed the number or percentage of unmatched graduates.

The exact a number of US-IMGs and non-US citizen IMGs who obtained first-year positions in the 2014 post-match supplemental process or later is also unknown, but at least in surgery, about 450 positions that were available after the initial match results were released consisted of nearly all preliminary slots good for only one or in some cases, two years of general surgery training. That amount of training is insufficient for obtaining board certification, but some prelim residents do progress to 5-year positions.

Here’s a harrowing account of one US-IMG’s quest for a residency position. He is fortunate to have obtained a preliminary surgery spot after both the main and supplemental matches.

Excluding ones in Cuba, there are about 40 medical schools in the Caribbean that cater almost exclusively to US citizens as well as some similar schools in Mexico.

Some key questions arise. How many international medical graduates, both US and non-US citizens, do not currently have residency positions? What will those without residency positions do to earn a living? How will they pay back their student loans if they are unable to practice as physicians?

If you go to an offshore school, the best case scenario is that you’ll have about a 50% or perhaps slightly better chance of matching to a residency position in any specialty and about a 2.5% to 3% chance of matching in general surgery. These odds may be worse if you choose a lesser-known school.

The deadly consequences of media distortion in health and medicine

The Affordable Care Act has made restaurants more partisan 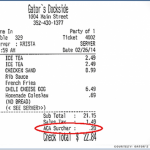