Politics in the US is discouragingly partisan. National politics has become increasingly partisan since at least the late ’60s, when the passage of civil rights legislation influenced many conservative southern Democrats to join the Republican Party. Even state politics has become more partisan, where even famously nice people in Wisconsin have found themselves battling their neighbors across political divisions. Fortunately, most of life does not force us to confront our political differences, meaning we can go out to dinner with our family and friends, sharing space with other diners free from concern that we will be confronted with partisan rhetoric.

According to a report on CNN Money, some restaurants in Florida are now making sure their patrons recognize the burdens being placed upon them by the Affordable Care Act. Here’s a copy of a receipt from one of these restaurants: 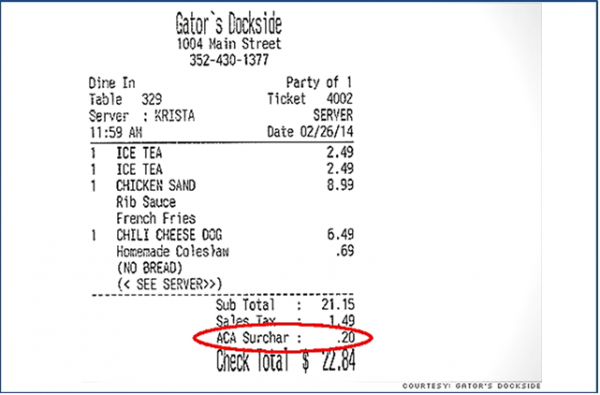 I find this disturbing for a whole host of reasons. The restaurant owner doesn’t choose to break the sales tax down, for example, to reflect which portion of that goes towards education, unemployment insurance, road maintenance, etc. The owner doesn’t inform customers how much cheaper their meal is as a result of federal subsidies to farmers. Instead, the owner singles out one, and only one, government program.

Which leads to what bothers me the most about this behavior — it politicizes a social and business setting that shouldn’t be politicized. Easy enough for those who object to this practice to boycott this restaurant. But in today’s climate, I expect that would only cause other people to be even more likely to go to such restaurants. What’s more, are we thereby forced to study the political allegiances of every consumer goods company we consider spending our money at? The restaurant chain Chick-fil-A already confronted this issue, when word got out about donations the company had made to oppose gay marriage. Mozilla, the company that makes the Firefox browser, ran into trouble when its new CEO was found to have donated money to oppose a gay marriage amendment. The CEO now stepped down. But before that happened, some people were urging computer users not to use that browser to signal their displeasure with the CEO’s political views.

Partisan politics is spreading from the corridors of Washington to innocent public spaces. I worry that this will further drive people apart from each other, people who have much in common with each other once they put their political differences aside. One of the strongest predictors of how much one person likes another person is proximity. We are already sorting ourselves into neighborhoods that strongly predict political affiliation. We flock to churches that match our political ideology. All of this sorting reduces the chance we will have casual encounters with people whose political beliefs differ significantly from our own. The behavior of these restaurant owners in Florida is aggravating this problem.

Are we heading towards a society where the choice of family restaurants must now be based upon our political allegiances?

The Medicare spending we should be concerned about

The Affordable Care Act has made restaurants more partisan
31 comments