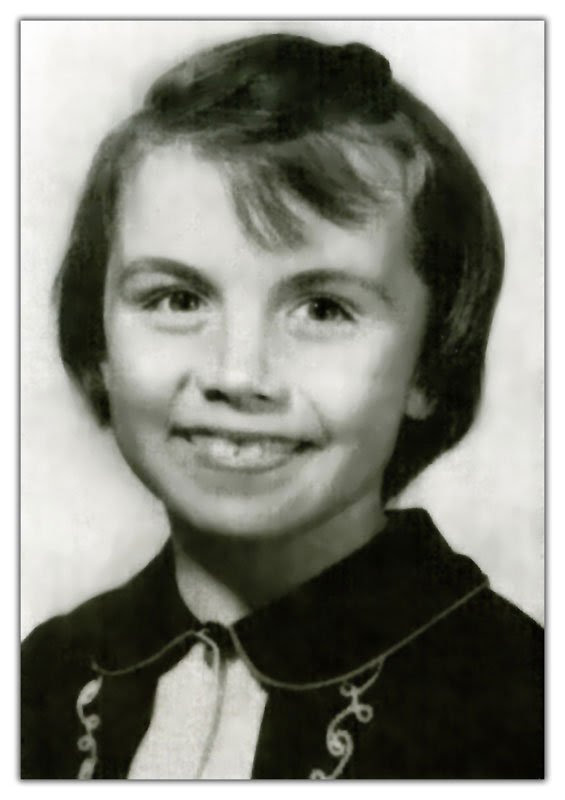 I was 8-years-old in June 1963 when the Readers’ Digest arrived in the mail inside its little brown paper wrapper. As usual, I sat down in my favorite overstuffed chair with my skinny legs dangling over the side arm and started at the beginning,  reading the jokes, the short articles and stories on harrowing adventures and rescues, pets that had been lost and found their way home, and then toward the back came to the book excerpt: “The Triumph of Janis Babson” by Lawrence Elliott.

Something about the little girl’s picture at the start of the story captured me right away — she had such friendly eyes with a sunny smile that partially hid buck teeth.  This Canadian child, Janis Babson, was diagnosed with leukemia when she was only ten, and despite all efforts to stop the illness, she died in 1961.  The story was written about her determination to donate her corneas as she knew she would soon die, and her courage facing death was astounding.  Being nearly the same age, I was captivated and petrified at the story, amazed at Janis’ straight forward approach to her death, her family’s incredible support of her wishes, and especially her final moments, when Janis looked as if she were beholding some splendor, her smile radiant.

”Is this Heaven?” she asked.   She looked directly at her father and mother and called to them:  “Mommy… Daddy !… come… quick !”

And then she was gone.

I cried buckets of tears, reading and re-reading that death scene.  My mom finally had to take the magazine away from me and shooed me outside to go run off my grief.  How could I run and play when Janis no longer could?  It was a devastating realization that a child my age could get sick and die.

Yet this story was more than just a tear jerker for the readers.  Janis’ final wish was granted — those eyes that had seen heaven were donated after her death so they would help another person see.  Janis had hoped never to be forgotten.  Amazingly, she influenced thousands of people who read her story to consider and commit to organ donation, most of whom remember her vividly through that book excerpt in Readers’ Digest.

I know I could not sleep the night after I read her story and determined to do something significant with my life, no matter how long or short it was.  Her story influenced my eventual decision to become a physician.  She made me think about death at a very young age as that little girl’s tragic story could have been mine and I was certain I could never have been so brave and so confident in my dying moments.

As a 10-year-old, Janis showed character that some people never develop in a much longer lifetime.  Her faith and deep respect for the gift she was capable of giving through her death brought hope and light to scores of people who still remember her to this day.

I recently thought back to Janis’ story a few months ago when I learned of a local child who had been diagnosed with a serious cancer.  I could not recall Janis’ name, but in Googling “Readers’  Digest girl cancer story,”  I rediscovered her name, the name of the book and a discussion forum that included posts of people in their late fifties, like me,  who had been incredibly inspired by Janis when they read this same story as a child. Many made the decision to become health care providers and some became professionals working with organ donation.

Janis could not possibly have predicted the difference her story would make in so many lives because of a story in the back of a little magazine mailed out to hundreds of thousands of homes weekly.  She paved the way for patients and families who have become activists through the power of the Internet and other media as they cope with their own loss and suffering.

We should always be grateful to those who share their story.  We will remember.