My kids were at the dentist this weekend for their routine cleaning and check ups (yes, Saturday hours!) when the hygienist mentioned x-rays. I smiled and mentioned I’d rather discuss the need with the dentist after his exam. This isn’t a dental x-ray thing, this is what I do for every test that involves ionizing radiation.

My son, Oliver, has had more radiation than most people will have. Ever. In fact, as he was extremely premature he had more radiation than most people will have in a lifetime before he was supposed to be born. In addition to the 30 or so x-rays he had over 9 1/2 weeks in the neonatal intensive care unit (NICU) he had a challenging procedure done under fluoroscopy to pop open his pulmonary valve when he weighed 3 lbs (when he should have still been a fetus). I read that the estimated radiation dose from that specific procedure is calculated at about 1,000 chest x-rays. It’s an older study and so I hope the calculations don’t apply to today’s imagining, but I admit I felt sick.

Oliver continued to have more chest x-rays long after he left the hospital that first time, probably another 25 or so over the next 5-6 years in addition to another fluoroscopic procedure when he was two years old, although this one was slightly less challenging so I’m hoping for a cumulative dose of maybe 200 chest x-rays. Oliver is also going to need at least one more fluoroscopic cardiac procedure and at some point our no-pneumonia-requiring-hospitalization-for-3-years streak will break and he might need another chest x-ray or two (because Oliver also has the gift of damaged lungs).

Radiation risk, from a cancer perspective, is higher the younger the age of exposure, but I don’t just think about that for Oliver and his twin, Victor. I think about it for my patients as well. I carefully weigh the risk and benefits of radiation because there is no “safe” lower dose. While it is true that the lifetime risk of cancer from medical x-rays is small, it is not zero. The biggest risk (looking at more common procedures) comes from a CT scan of the abdomen or pelvis. When performed at the age of 20 about 1 additional person in a 1,000 will get cancer from this test, so quite small compared to the chance of getting cancer in general (about 1 in 5 people will get cancer in their lifetime), however, enough CT scans are done that the procedure raises the population’s risk and if you are that “one” then it’s 100% for you. If you had a new pain and a fever and the CT scan diagnosed an abscess leading to medical care that saved your life then that 1 in 1,000 risk was worth it, however, if you have chronic pelvic pain and the chance that anything causing your pain will be identified by a CT of your pelvis is less than 1 in 1,000 then that risk isn’t favorable. 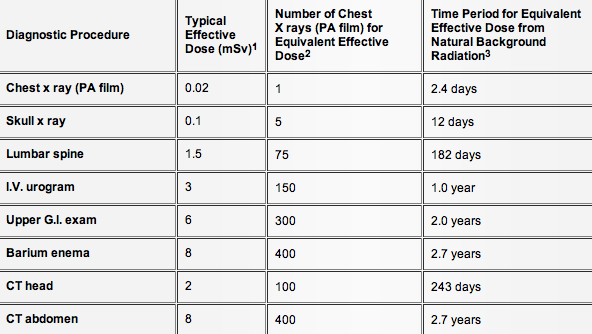 A CT of the abdomen is the radiation dose for 2.7 years. If I’m meant to live 90 years or so I can absorb the radiation of a few CT scans, right? While equating radiation dose from a procedure into relatable term helps from an understanding standpoint, in my opinion it doesn’t imply safety because your cells taking in 8 mSV of radiation over 2.7 years is a lot different from your cells absorbing that same dose over 20 seconds. Let’s use the same analogy with calories. In 2.7 years you will consume roughly 197,000 calories. What do you think would happen to your body if you were forced to consume those calories in 20 seconds or if you were forced to consume 2.4 days worth of food in less than a second.

Instead of abstract terms, such as radiation doses living in Denver versus San Francisco, what every patient needs to know is specifically how this x-ray will enhance their medical care and what are the potential risks. Every test has a risk-benefit ratio especially when radiation is involved. While a recent study raises the possibility of a link between thyroid cancer and dental x-rays taken before 1970 (interestingly not for people who were exposed as children or adolescents), the study really asks more questions than it answers.

In my opinion it is a good idea to follow the FDA recommendations, which indicate that providers should do the following:

I spoke with the dentist. He did a thorough exam and it turns out that Oliver is still a pretty good brusher and flosser. Oliver also gets fluoride, does not drink soda, eats very healthy for a 10-year-old, has never had a cavity, and goes to the dentist regularly. ”What will the x-rays add?” I asked

“They can pick up caries between the teeth that I can’t see,” was the answer.

And so Oliver’s dentist and I agreed that as his teeth and gums look great and he is in the lowest risk category with a history of far more radiation exposure than most children that we would just hold off on the routine x-rays for now and reassess at his next visit in 6 months. Oliver’s twin brother, Victor, is a less dedicated brusher and flosser, eats way more candy, and has already had a cavity and while he has had more radiation than most, he is not in Oliver’s league. Victor’s risk-benefit ratio from a screening dental x-rays is different than Oliver’s and I have him on the dentist’s recommended schedule.

The FDA’s recommendations are sound. Don’t have any x-ray (or any test for that matter) until you have reviewed the benefits as well as the risks and that you and your provider are both assured it’s truly necessary. For the vast majority of children the risk-benefit ratio for dental x-rays will be largely in favor of imaging on the recommended schedule, but don’t try to sway me based on how the radiation of a chest or dental x-ray compares with a flight or living in Denver because it’s just not the same thing.

What if exercise counseling came in prescription form?

The conundrum of forcing treatment on psychiatric patients

Radiation from x-rays and living in Denver: They’re not the same
3 comments