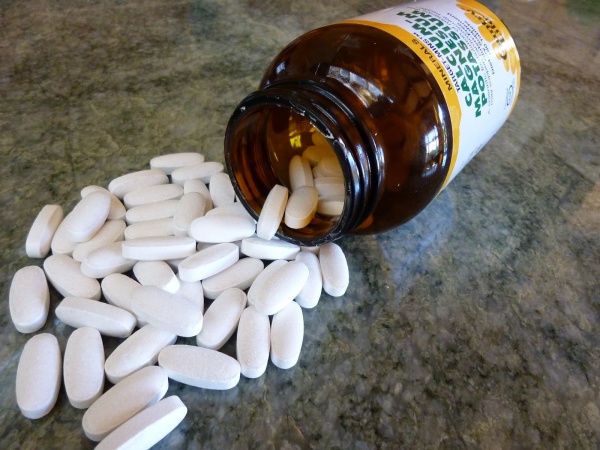 An article from Sweden was recently published showing that in a very large group of women, over 60,000 of them, followed for 19 years as part of an also very interesting study of the effectiveness of mammograms, women who get more calcium, in their diet or as supplements, had a higher risk of dying of anything, but especially of heart attacks. It is unclear why this would be true, but there are various theories.

Further, the study showed that this risk was more pronounced if the calcium was taken as supplements, but still present in women who got their calcium from the food they ate. The highest level of risk was in women who got more than 1400 mg of calcium a day, and an intake of 700-1000 mg a day did not particularly increase risk. The women with the lowest average calcium intake were not at any increased risk of death, which was a surprise to the researchers. Information about calcium intake was taken from the subjects’ reports of diet and supplement use, which was further validated by phone interviews of recent food intake. Since most women think that consuming calcium is healthy, I would guess that there was a tendency to overestimate calcium intake, suggesting that real risk may be present with lower calcium intakes than the study states.

This is big news. Or is it? No, it actually isn’t. In 2010 the British Medical Journal published a meta-analysis of studies of calcium supplementation in healthy people and concluded that there was increased cardiovascular death in those given supplements. There had previously been studies showing that calcium supplements in dialysis patients accelerated calcium deposition in blood vessels and increased cardiovascular death.

It has been part of our general medical wisdom for my many years of practice to recommend calcium, as food or pills, to our women patients. I remember several years ago when we began to be aware of the real impact of osteoporotic hip and spinal fractures in our aging population that physicians were encouraged to recommend to our post-menopausal patients that they take 1200-1600 mg a day of calcium. That was very hard to do. A cup of milk contains about 300 mg of elemental calcium, yogurt slightly more, cheese not much at all. Calcium fortified orange juice was about as much as milk. Dark green leafy vegetables contain calcium, but not a whole lot. A cup of collard greens, cooked, contains about 350 mg, but people rarely eat that much cooked greens. I would work through how to get all that calcium in the diet and usually suggest my patient take a chewable calcium pill for every meal they didn’t eat something that was high in calcium. Luckily for my patients, I doubt many of them really did this.

Calcium supplementation seemed the right thing to recommend after estrogen, which is well known to reduce fracture risk, was discredited by the Women’s Health Initiative due to what appeared to be an excess of heart attacks and strokes in treated patients. There were other medications for osteoporosis, but they had side effects and were really only approved for established osteoporosis, which most patients don’t want to wait to get.

But why did we ever recommend calcium supplements at all? Did we have any good evidence that they worked? Sort of, but in retrospect, not really.

It does make sense, when you think about it, that calcium would strengthen bones. Bones are, after all, made mostly of calcium. Over the last 3 decades at least we have studied the effects of calcium supplementation on both bone density and on risk of fracture. We care most about risk of fracture, because bone density is just a test, and is not necessarily indicative of whether a person will break a bone. The most important kinds of fractures as we age are those of the hips and vertebrae. These are the ones that cause disability and death and are associated with the thinning of bones that comes to many of us with age, that is to say osteoporosis. Although some studies early on appeared to show that taking calcium, with or without vitamin D, reduced these important fractures, later analysis of all of the well done studies showed no benefit. There was even a suggestion that higher calcium intake might have been associated with more hip fractures. Many of these studies were done in the most scrupulous way possible, using double blind prospective methodology or correcting for factors that might make patients with higher calcium intake be those who were at higher risk of fracture in the first place.

What about vitamin D? Does this make a difference?  In the Swedish mammography cohort, vitamin D supplementation did not reduce the risk of heart attack or death that was associated with increased calcium intake. In a recent large study out of Finland from 2010, combining calcium and vitamin D had a slight but not statistically significant effect on fracture risk in a group of 65-71 year old women living in northern Finland. Vitamin D itself is the subject of lots of research and although it may be good to supplement it, especially in people with risks for low levels, it is not clear that it reduces the risk of fracture in the majority of post menopausal women.

So what is the bottom line here? It does appear that taking calcium supplements and deliberately pushing high calcium foods increases risk for death and doesn’t save a person from disabling fractures. Doctors have so many things that they need to advise people about in a preventive office visit, getting exercise, quitting smoking, controlling their blood pressure, getting vaccinated against dread diseases. Now we just don’t have to also tell our patients to drink milk and take large and unpalatable calcium pills. We should probably tell them if they are already doing that, to stop the pills and concentrate more on a healthy balanced diet, with plenty of fruit and vegetables and fish and olive oil. We can rejoice in having one less thing to fuss about!

The other people in the waiting room

Surrogate parents must discuss abortion with their surrogate

A high calcium diet and calcium supplementation: Is it bad for you?
10 comments