I believe the role that God plays in our lives is often magnified during times of great suffering. How we perceive that role is a question of faith, often strong and steadfast in some, especially my patients, but sometimes unreliable and inconvenient to others, like myself, on a journey of understanding and acceptance.

During the terminal stages of my grandmother’s colon cancer, I recall her saying, “Je pense que le Bon Dieu m’oublie.” Despite high school and college French, I never was able to pick up my grandmother’s French Canadian dialect.

“She thinks God forgot her,” my dad translated.

I was puzzled. My grandmother was a pillar of the church. Educated in a rural convent, she left Quebec with my grandfather and together they helped build the new Catholic Church and school where my grandmother taught first graders and sang solos at Midnight Mass. She learned English predominantly through romance novels—the margins annotated with dictionary definitions of unfamiliar English words. I loved everything about her.

“So how could Grand Maman think God forgot her,” I wondered aloud.

“He didn’t,” my father reassured.“God’s just busy getting heaven ready for her. Your Grand Maman is very tired. She needs to rest.” I failed then to understand that she never felt abandoned by God, merely that He was tardy in calling her home.

Marie recovered from surgery beautifully. Preoperatively, she assured me (as well as herself) that Jesus would lead her through. And He did. But despite her strong belief that her large mass was benign, I extracted several pounds of cancer from her abdomen. Marie required no blood transfusion, and her enormous incision closed easily. Uncomplaining, she transcended the pain, indignity, and betrayal of unanticipated bodily functions. She was discharged the following Sunday, a day early.

During her hospitalization, Marie’s bible lay on her bedside table. Unlike most hospital bibles, this one was actually open—its pages somewhat tattered, with notes scattered in the margins. Marie’s bible was a “working” bible… for this was not Marie’s first bout with cancer.

Ten years earlier, at age 32, she was treated for breast cancer—a difficult and protracted battle through chemotherapy, radiation and surgery, and countless days of nausea and fatigue. But others did unto Marie and her family. And God saw her through it. The notes in the margins bore witness to that.

This time Marie’s chemotherapy began well. Despite pumping powerful chemicals directly into her abdomen, she experienced none of the nausea that so debilitated her a decade earlier. But when the subsequent chemotherapy was abandoned because of an infection, she worried. “I remember last time how important it is to get your chemo on time,” she recalled. “Won’t this decrease my chances?”

Before I could reassure her, Marie smiled, “No matter, God will look after me.”

The role God plays in our lives can be powerful. Whether we pray to live completely or die comfortably, the supplications continue until our prayers are answered. Yet, how do we know if we’ve actually changed the outcome or coincidently selected destiny’s preplanned course? We can never know. Yet we continue to believe.

As an adult, I’ve had an on again/off again relationship with God. Describing myself as more spiritual than religious, I felt that introspection and “doing the right thing” somehow absolved me from the need to participate in organized religion.

A frequent witness to the power of faith, I am back at church, having relinquished Catholicism for the whitewashed simplicity of Presbyterianism. Unfortunately, my grandmother’s faith gene appears to be recessive, but her music gene has proven dominant and I, too, sing solos at church on Christmas Eve. Unlike Marie and Grand Maman, with decades of religious study and a faith that provides the very backbone of their existence, I still dabble and I have yet to crack a bible.

Suspended between healthy scientific agnosticism and unyielding faith, I’m selective with my prayers. I fix what I can myself and reserve my praying for the tough stuff—not day-to-day trivialities, lest He become tired of my pettiness and turn a deaf ear to that one, last, really big need. When I pray, I pray for others, especially my patients. I’ve always had everything I needed and most of what I wanted … except for Marie’s and Grand Maman’s faith–the force strong enough to bring life or death … the force powerful enough to bring hope to the weary and peace to the anguished. Maybe I should pray for some of that.

Solving the issue of tired doctors: My radical idea 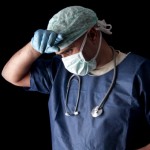 Why I'm skeptical of the growing number of disability beneficiaries

A frequent witness to the power of faith
4 comments