When health plans have merged, they’ve said that a bigger insurance company would drive down premiums. The casual acceptance of this economic fallacy led to more than a decade of unchecked megamergers that helped health plans cement dominant market positions across the country.

Mergers and acquisitions have produced large health insurers with monopoly power. That assessment is part of the AMA’s new study Competition in Health Insurance: A Comprehensive Study of U.S. Markets. According to the 2012 annual market analysis, higher premiums, watered-down benefits and growing insurer profitability suggest that a lack of health insurance market competition is harming patients and physicians.

The AMA analysis concluded that anti-competitive conditions are present in 70 percent of 385 metropolitan areas in the U.S. Nearly 40 percent of metropolitan areas have one health insurer with a majority share of the commercial health insurance market. The results of the study should prompt federal and state antitrust authorities to more vigorously examine the anti-competitive effects of proposed mergers among health insurers.

The anti-competitive areas highlighted by the AMA analysis are vulnerable to a marketplace imbalance that favors powerful health insurers. A dominant health insurer can flex its monopolistic muscle to reduce payments to doctors and undermine the quality of care, without fear of losing business to a competitor.

But there is a danger that large health insurers will have too much influence in the development, governance and operation of these exchanges. It is vital to include physicians and patients in the governing structures of health insurance exchanges to ensure they best meet the health care needs of residents in each state.

Tips to examine the eardrum of the squirming, angry child 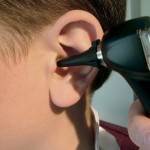