Everybody knows that some medications can cost a lot of money.  I always try to take the cost to my patients into account when prescribing a medication- after all, if someone can’t afford it, they are not going to take it.  When it’s appropriate (and 9 times out of 10 it is), I try to prescribe a generic medication.  They are much cheaper and work just as well as the brand name (almost always).

Imagine my surprise when a patient recently presented me with a receipt, along with a request to change medication because the one I gave her was too expensive. 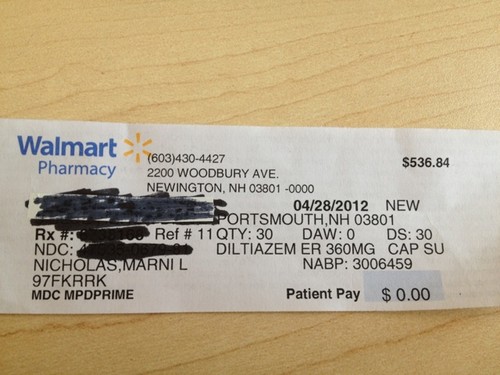 The medication was diltiazem ER, the generic form of Cardizem CD.  The patient pay portion was $0.  However, this patient is on Medicare, and the cost of every drug inches her closer to the “donut hole.”  Basically, when the cost of drugs gets up to a certain amount (around $2,700), the patient enters a coverage gap and must pay 100% of medication costs.  If you look in the upper right hand corner of the receipt, you will see that the cost of this drug was $536.84.

To say I was stunned is putting it mildly.  So much so that I was convinced it was a mistake.  After, the cost of brand name Cardizem CD is $288.99.  How could a generic be more expensive?  Cardizem went generic in 2010 — that’s plenty of time for the price to come down.

I called Walmart to see what the story was.  I spoke to the pharmacy tech and asked her how much diltizem ER costs.  Her answer was that there was one that was $54 and another that was $84.   I then gave her my patient’s information and asked her why she was charged $536.84.  After a lot of hemming and hawing, she said that that was the cost for one particular pill made by one particular manufacturer.  I then asked her why my patient was given this one, instead of the one that was 10x cheaper.  She couldn’t answer the question, so I got the pharmacist on the phone.

I wish I could say I got a good, reasonable explanation.  I did not.  She told me that there are several versions of generic diltiazem ER.  They are all basically the same, but range in price from $53 to $536, depending on the manufacturer.  She had no idea why my patient was given the most expensive one.  I have some ideas, but I’m not going to speculate here, since I was always taught that if you can’t say anything nice, then don’t say anything at all.   I clarified to her that my patient was to only get the cheap one.  However, the damage is already done and she has edged an extra $500 closer to the donut hole.

So, what’s the moral of the story?  Don’t just accept that the price of a drug is what it is.  If something seems much more expensive than it should be, talk to the pharmacist or your doctor.  Shop around and bring your business elsewhere if a pharmacy is not willing to assist you.

Marni Nicholas is an internal medicine physician who blogs at Patients, Patience, and Paces.

The Supreme Court on health reform: Everybody wins!