It is a big bummer to be an asthmatic. Not only is breathing a problem, but even the treatment for asthma can cause problems.

All asthma patients know to rinse their mouth out after inhaler use due to risk of oral thrush, but what about from the back of the mouth down to the vocal cords? This nether region can’t be gargled very easily. One can swallow water to rinse this area out, but the vocal cord region would still not be addressed (otherwise aspiration would occur).

And that leads to potential vocal problems, like fungal laryngitis (or thrush of the voicebox). Here’s a picture of what that looks like. To compare, normal is shown in the bottom picture. 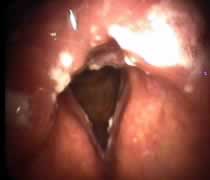 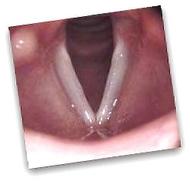 Note the white patches indicative of fungal growth. This fungal infection can lead to symptoms of a mild (if any) sore throat, but most patients complain of hoarseness as their only symptom.

Treatment is ideally to stop the steroid inhaler triggering the infection, but if an asthmatic needs it … than they need it. As I often tell patients, breathing is more important than voice. Often, anti-fungal medications like diflucan and nystatin can eliminate the fungal laryngitis, but problem is, as long as steroid inhalers are used, it comes right back. And repetitive anti-fungal treatment can place the patient at risk for a drug-resistant fungal infection.

So what to do?

There is one type of little-known (unpleasant) treatment an asthmatic patient can perform to minimize risk of fungal laryngitis while still maintaining steroid inhaler use.

It’s called laryngeal washes and it takes a lot of time, patience, and period of discomfort. Think of it as gargling of the voicebox.

The patient takes a curved luer-lock cannula (picture shown) attached to a syringe filled with salt-water. While opening the mouth and sticking the tongue out, the curved end of the cannula is directed such that the end is pointed straight down into the throat. After taking a deep breath in, while saying “ah”, salt-water is injected down into the throat thereby “gargling” the voicebox.

This needs to be done after every steroid inhaler use. Or during an active fungal infection, at least 4 times per day.

Gagging is the biggest problem preventing correct usage of this technique. Coordinating the injection while saying “ah” is another issue since if it is incorrectly performed, can lead to aspiration and severe coughing. As such, it is not for everyone.

One can purchase such “luer-lock laryngeal cannulas” from any ENT medical supply company.

Christopher Chang is an otolaryngologist who blogs at Fauquier ENT Consultants blog.

Should patients be allowed to record their office visit?