There are some lessons we learn and keep re-learning in medicine. For me some of these recurring lessons are,

I encountered a young patient recently, just at the cusp of adolescence and adulthood, who had undergone a procedure related to a sports injury. Other people had been responsible for his care during surgery; I was coming on duty for the night and was part of the team watching over him in the recovery room.

Someone came to me and said, “His T-waves are flipped on the monitor. Do you want to do anything?”

T-waves are a particular portion of the tracing generated on a heart monitor or EKG by the electrical activity of the heart. Normally they look like a small hump. Sometimes the hump is inverted and the wave resembles more of a “u.” This is often a concerning sign with many possible causes, but in children and adolescents in can be normal in certain areas of the EKG.

I went to the patient’s bedside. He was resting comfortably and his vital signs were good. But I had a nagging feeling inside.

Listen to your gut.

A 12-lead is short-hand for a complete EKG. It’s unusual for one to be done on someone this age – who looks for heart problems in healthy, athletic kids? – but I wanted to see for myself what the complete picture looked like.

I took a stethoscope and listened to the patient’s chest. His lungs were clear but he had a loud murmur. I looked on the preop evaluation. The physical exam was noted as normal. He hadn’t had any medical issues at all according to his history. He wasn’t aware of being told of a murmur before.

Pay attention to the clues.

While the EKG was being done I called a hospitalist and a cardiologist for consultation. My kid started feeling nauseated and threw up a little. The cardiologist wasn’t able to call me back because of a snafu with the phone system. The hospitalist was tied up right at that moment but agreed to see my patient shortly. The ICU folks next door were tied up too.

Meanwhile my young patient, whom I shall call Joey, was getting increasingly pale and lethargic. His vitals were still strong, and he complained of no chest pain or tightness. But when the EKG printed out this is what it showed: 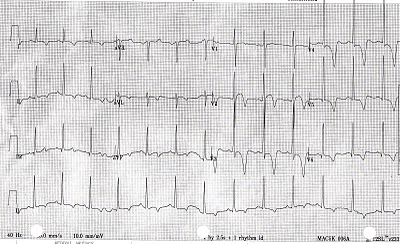 I thought this was a significantly concerning EKG. I ordered cardiac enzymes to be drawn and sent to the lab. I tried to page the cardiologist again but was still unable to reach him. I really wanted an echocardiogram to see what that heart muscle was doing and suspected it was abnormally thick. I wanted to give Joey drugs that are normally considered “cardioprotective” but I also wanted to keep his blood pressure up to preserve his heart’s blood supply. Meanwhile, he was beginning to look sicker and sicker.

“Dr. T, everyone you’ve called hasn’t really responded so far,” the recovery room nurse said to me. “He looks a lot worse than he did when we first started. Why not call a rapid response team to the bedside?”

Listen to your team. Don’t be afraid to call for help.

“Sure,” I said. The nurse called the emergency team to the recovery room. I heard the overhead page summoning my reinforcements. Part of me felt like an idiot, and the other part really wanted some input on what to do with this non-child, non-adult with a grossly abnormal EKG but no chest pain and no prior history or abnormality. If there was something wrong with his heart, which I strongly suspected, he needed to have an echocardiogram right away and perhaps some more invasive procedure, preferably at a more advanced center where things could get done faster and there were lots of pairs of hands at the ready.

The hospitalist arrived in a matter of seconds along with the critical care doc, IV access team, respiratory therapist, and a couple of other responders. I showed her the EKG. She was somehow able to get in touch with the cardiologist directly and handed me the phone. I explained the situation.

The cardiologist said, in a tone which I can politely describe as skeptical, “Do you REALLY think this young KID is having a HEART attack?”

Stick to your guns when advocating for your patient.

“I really think, having been with him for the last half hour, that he is having some kind of serious cardiac issue. Something is wrong. His clinical picture is deteriorating before my eyes. I need some input on the next step.”

“You said he had some ST elevations on the EKG? In which leads?”

I started to explain the grand mess that was the EKG, but then the hospitalist took the phone back. “Do you want me to fax it to you so you can see it?”

We faxed the EKG to the cardiologist. He called us back and had us send Joey to the nearest tertiary care center.

Joey’s going to be fine. He has a condition that sometimes predisposes to sudden death – the kind that makes athletes drop dead on the field or on the court – but he can get help for it and do reasonably well. It’s funny – I know just how to handle his condition on the O.R. table, under anesthesia, but the acute diagnostic management definitely pushed me out of my comfort zone.

Throughout this entire incident my beeper was going off non-stop for other things – OB wanted an epidural, there was an O.R. case to start that I had to postpone, I needed to speak to Joey’s parents who were completely blind-sided by it all. But we ultimately kept our focus on Joey and were able to get him the help he needed. I learned so much from his recovery room course – things I had learned before, but which are always good to learn again.

Penicillin and the Cocoanut Grove fire in Boston

Bedbug rashes, and how to prevent and get rid of bedbugs

Never forget to advocate for your patient
7 comments