Bob Hebert, in his column in The New York Times, recently wrote that, “Life in the United States is mind-bogglingly violent. But we should take particular notice of the staggering amounts of violence brought down on the nation’s women and girls each and every day for no other reason than who they are. They are attacked because they are female.”

As a family physician I can attest to the violence against woman both physically and mentally.  The words, “they are attacked because they are female,” is especially haunting and disheartening to me. The one issue that this article did not address is the fact that the “attacks” start even from conception, in the “safety” of the womb.

I recently read an article entitled, “The Daughter Deficit,” which describes what happens when parents have a fervent preference for male offspring.

This article cuts to the core of my heart for several reasons:

1. I am of Asian decent and have witnessed the subtle bias towards boys and having sons in my culture
2. I am the mother of three beautiful daughters
3. I believe in the sanctity of life from the womb

Reading these articles reminded me of a patient encounter that I had during residency. An Asian couple came to my clinic for an office visit. The wife was around three to four months pregnant and they had come in to see me after they had just had an ultrasound.

The purpose of the visit was to find out the sex of the baby. After I happily told them that they were going to have a baby girl, they quickly shot a glance at one another and said, “We want to terminate the pregnancy.”

I was taken off-guard but even more shocked when they told me their reasons.

“We already have two girls at home and we want a son. We have too many girls.” My eyes welled with tears as I thought of the fate of this poor, helpless baby who had no voice, no rights, and who was about to be “attacked just because she was female.” 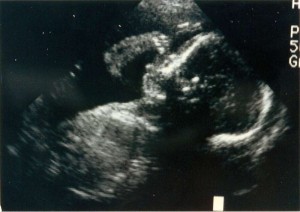 I proudly showed them the image, and the look and emotion on their faces changed.

“That is our baby?” they inquired. “We didn’t think it had that much form, and she is sucking her thumb already?”

I explained to them that their baby was completely formed with a beating heart. And yes, she sucks her thumb and she can feel pain. As they left the office, I said a little prayer for them and the fate of the little baby girl.

Fortunately, there was a happy ending to this whole encounter. The couple, after they saw the precious ultrasound image, decided to keep the baby. I helped deliver the baby six months later and they added a third healthy beautiful girl to their family.

This patient encounter had a deep impact on me. By the grace of God, it was the power of a captured image, a baby sucking her thumb.

It was an image that saved her life.

Linda Lee is a family physician who blogs at Dr. Linda’s Life Lessons.

The ultrasound that saved a baby girl’s life
18 comments