A recent Manhattan Research study found that twice as many physicians are using Apple’s iPhone this year than last, but that BlackBerry is still the most popular smartphone among physicians. The same study found the percentage of physicians in the U.S. using smartphones increased 20 percent from 2008 to 2009. 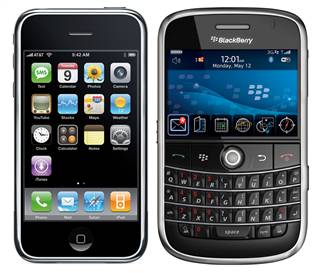 With more and more physicians looking to the Internet for clinical work and communicating with colleagues, the increase in smartphone usage is not surprising. And it seems that more and physicians, pharmacists and IT professionals I see in hospitals are carrying iPhones. So, why are they picking iPhones over Blackberrys?

Is it simply the tech hype, or are iPhones proving to be better devices for physicians?

That’s a question open to speculation. But with the growing volume of apps available for the iPhone, and especially clinically related apps, iPhones seem to be garnering the most attention. And, at present, it’s winning the popularity contest.

More often, I see articles about physicians and nurses identifying a problem and developing an iPhone app to solve it. Blackberry devices have been present in hospital environments for years, but their lack of a more approachable development platform means that the iPhone will get all the glory in the press.

Furthermore, a recent study by Epocrates found that 45 percent of med students are using iPhones, where only 12 percent are using Blackberrys. That same study found that med students are four times more likely to consult a mobile reference for a clinical question than ask their own attending physician.

So while Blackberry is the most popular Smartphone today, studies are forecasting that the tables will soon be turning. Is it only hype?

Tom Tharp is the Director of Product Marketing at PerfectServe.

Is the flu a heart attack risk factor?

An iPhone or Blackberry for doctors and medical students?
10 comments