In Wednesday’s address to Congress and the nation, President Barack Obama made a number of statements about healthcare reform, some involving issues that would directly affect medical practice. MedPage Today examined five of Obama’s statements to add context to the sound bytes.

“I don’t believe malpractice reform is a silver bullet, but I have talked to enough doctors to know that defensive medicine may be contributing to unnecessary costs. So I am proposing that we move forward on a range of ideas about how to put patient safety first and let doctors focus on practicing medicine. I know the Bush administration considered authorizing demonstration projects in individual states to test these issues. It’s a good idea, and I’m directing my Secretary of Health and Human Services to move forward on this initiative today.”

While Obama did not delve into the details of a pilot program, there are clues in a paper he and Secretary of State Hillary Clinton wrote in 2006 for The New England Journal of Medicine.

In that article, they wrote: “To improve both patient safety and the medical liability climate, the tort system must achieve four goals: reduce the rates of preventable patient injuries, promote open communication between physicians and patients, ensure patients access to fair compensation for legitimate medical injuries, and reduce liability insurance premiums for healthcare providers.”

Obama has said he does not support the changes favored by Republicans and many physicians, including caps on jury awards for malpractice settlements, because he doesn’t think they’re fair to injured patients.

So a pilot program would likely focus on communication between physicians and patients. Such programs have been piloted in at least 15 states since the 1990s, according to a paper by the Robert Wood Johnson Foundation. 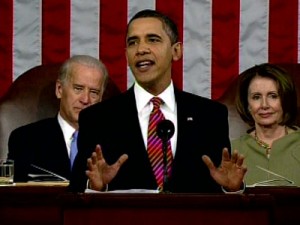 When Chris Stern Hyman, JD, the founder of the Medical Mediation Group, heard Obama’s speech, she thought he might be referring to alternative dispute resolution pilot programs. They study the effect of alternative dispute resolutions, perhaps under a model that would hold the physician or medical institution harmless if they agree to disclose why the medical error occurred.

In the NEJM paper, Obama and Clinton outlined legislation they co-sponsored when they were both senators.

“Under our proposal, physicians would be given certain protections from liability within the context of the program in order to promote a safe environment for disclosure. By promoting better communication, this legislation would provide doctors and patients with an opportunity to find solutions outside the courtroom.”

While no one has proved that alternative dispute resolution can replace the tort system, there is anecdotal evidence demonstrating the effectiveness of bringing the involved parties together to discuss what happened — and even offering an apology to the harmed party, Stern Hyman said.

She is the author of a small 2006 study showing that arbitration resulted in medical liability settlements that were resolved much faster than if the case went through the tort system.

Stern Hyman’s recruited plaintiffs who were suing physicians in the New York Heath and Hospitals Corporation to undergo mediation instead. Of the 19 cases that were mediated, 13 reached an agreement in a mean length of 2.3 hours.

“When you compare that to the years it often takes to complete litigation on one of these cases, [the difference] is stark by comparison,” she said.

In 11 of the 19 cases, an apology was offered by a representative from the hospital system. When an apology occurred, a settlement was about two and a half times more frequent (P=0.04).

“The only thing this plan would eliminate [in Medicare] is the hundreds of billions of dollars in waste and fraud, as well as unwarranted subsidies in Medicare that go to insurance companies …”

To date, the White House has detailed hundreds of billions of dollars in cuts to the Medicare program. First, the administration outlined $634 billion in savings, about half of which would come from cuts to Medicare and Medicaid. These include elimination of overpayment to Medicare Advantage plans.

The Advantage plans, administered by private insurance companies, are favored by many Republicans, and enrollment grew rapidly during the Bush administration.

The government pays Medicare Advantage plans, on average, 13% more than a comparable patient would cost in a traditional Medicare plan, according to a 2008 study published in Health Affairs by researchers with the Medicare Payment Advisory Commission (MedPac), which advises Congress on Medicare issues.

Recent statements from Obama suggest that cuts to Medicare would reach further than eliminating waste and cutting Medicare Advantage plans. In June, the White House said $110 billion could be saved if Medicare payment rates were updated to account for hospitals becoming more productive. Another $106 billion would come from cutting subsidies to hospitals for treating the uninsured, a group that would “vanish” if coverage were extended to all Americans.

“And insurance companies will be required to cover, with no extra charge, routine checkups and preventive care, like mammograms and colonoscopies — because there’s no reason we shouldn’t be catching diseases like breast cancer and colon cancer before they get worse. That makes sense, it saves money, and it saves lives.”

The claim that mammograms save lives is disputed. A study in the British Medical Journal found that such claims are one-sided. According to the BBC, this prompted a group of doctors in the U.K. to distribute leaflets stating that for every 2,000 women screened regularly for 10 years, one will avoid dying from breast cancer.

As for colonoscopies, the U.S. Preventive Services Task force recommends screening using fecal occult blood testing, sigmoidoscopy, or colonoscopy beginning at age 50 and continuing until age 75. For those over 75, routine screening is not recommended.

As for the claim that prevention saves money, the Congressional Budget Office has said that paying for preventive services will not actually result in savings.

“Although different types of preventive care have different effects on spending, the evidence suggests that for most preventive services, expanded utilization leads to higher, not lower, medical spending overall,” wrote Doug Elmendorf, director of the CBO, in a letter to Rep. Nathan Deal (R-Ga.).

However, the CBO has been criticized for being too short-sighted in how it “scores” legislation that might have a long-term savings but require immediate outlays.

“There are those who claim that our reform effort will insure illegal immigrants. This, too, is false. The reforms I’m proposing would not apply to those who are here illegally”

Some Republicans claim that in expanding insurance coverage to the uninsured, people who are in the U.S. illegally would also be covered. There are provisions in the House bill and the Senate HELP bill that would prohibit this. The outline of the Senate Finance Committee’s bill states that illegal immigrants would not be eligible for tax credits meant to help low-income citizens purchase insurance from the insurance exchange.

“Some of people’s concerns have grown out of bogus claims spread by those whose only agenda is to kill reform at any cost. The best example is the claim … that we plan to set up panels of bureaucrats with the power to kill off senior citizens. It is a lie, plain and simple.”

This rumor was started when former New York lieutenant governor Betsy McCaughey charged that the House bill would require everyone in the Medicare system to undergo mandatory end-of-life counseling every five years. Former Alaska governor Sarah Palin perpetuated the idea, and Obama and other Democrats have been trying to quash the allegations ever since.

The actual provision that is in the House bill would pay physicians about $75 to do what many geriatricians and palliative care specialists already do for free: create a written plan with patients who still have cognitive function to specify the type medical care they want — or don’t want — at the end of their lives.

“Advance directives are a way to empower patients, not to turn these decisions over to a doctor or to the government,” said a Christine Cassel, MD, a palliative care physician who helped craft the bill’s language.

Are cardiologists going to take their reimbursement frustrations out on primary care residents?