Recently, I was on several calls concerning the precipitous rise of COVID-19 cases and the burden to the health care system. There’s no doubt that we are at a point where challenges become crisis, and crisis becomes collapse. The constant influx of “breaking news” into our psyche has blunted any ability to decipher the nuances of this escalation.

But as this is not our first go-round, most stakeholders have already exhausted their list of potential mitigations. The problems are well-known:

We know that vaccination does not prevent infection, but it will most assuredly keep you from needing hospitalization. The young do well; the older, the obese, and the unhealthy fare less well.

The myth of working faster and harder

In the town where I was a family physician, I spent time on the sidelines at our small college’s football games. As the doc on call, I was fortunate to experience quite a few halftime locker room speeches—some effective, some not so effective. We weren’t a great team. Most of the players were there for the academics, and not for some higher sporting aspiration. More often than not, we would be behind on the scoreboard as we came in at the half. The guys would be worn-out and tired, but always competitive. One particular halftime ended with a plan: “We’re going to run faster, block harder, and tackle more—and we’re gonna win this game!” This was little consolation for guys who were already giving it all they had. No player takes to the field expecting to do less.

But I remember one coach who had once been on the coaching staff of a Super Bowl championship NFL team. His words went something like this: “They are killing us in the secondary, so we’re going to switch it up. We’re going to run a four-man front and blitz more. On offense, we’re going to keep it on the ground, even if we don’t score in the third quarter. We’ll draw them in close and then we’re going to open it up in the fourth quarter.” It was a real plan, something tangible, thoughtful, and informed. The players knew what they needed to do, and as a result there was team buy-in that the second half would be different.

There are few times in the last two years that this global scenario has afforded us the ability to have a tangible, thoughtful, and informed plan. But we know more now than we ever have before. We have more tools at our disposal than we once did, and we have people who are committed—day in and day out—to taking the field. They just need a plan. Emergency declarations and crisis standards of care are a knot at the end of the rope, a stopgap, a plan of last resort. Essentially, we have been telling our caregivers and first responders to run faster, block harder and tackle more.

We must change the game plan to win this round. If I was in the locker room, here’s what I’d say:

State and federal leaders are constantly looking for new ways to change the COVID landscape. No one likes to deliver the same ineffective pass. As a community, we have the power to make a tangible impact on this game: we already have the knowledge we need to make effective changes. It’s time to support our health care first responders without repeating the tired advice to do more with less. Let’s give them a new playbook to help them go out and finish the game.

Richard Watson is a family physician.

Prioritizing physician wellness: Reducing burnout during the COVID-19 pandemic and beyond [PODCAST] 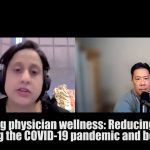 What can we learn from Cheslie Kryst?