At some point in my career, I had the crazy idea that if I could scale the patient-centric work I was doing in my community at a small rural hospital — then I could make more of an impact. This is why, when a technology company came calling, dangling a carrot in front of my nose to “disrupt” health care, it seemed like a no brainer to make the leap — to try and change the status quo of the industry. It also didn’t hurt that there was a bag of cash attached.

When they let me go to my first HIMSS, I was in shock at the grandness of it — sickened, really. We had just spent $250,000+/- to design and build a booth, which sat on probably a $40,000 piece of prime real estate on the conference floor. But within about 10 minutes, I saw through all the BS and said, “Screw it.”

I spent the next five hours walking up and down the main aisles — seemingly each a mile long.

Big company after big company. Buzzword after buzzword. Flashing signs, banners, TV screens. Presenters standing on their soap boxes shouting, “My product is better than theirs!” —as their “booth babes” welcomed attendees into their traps with cold beer, false hope, and false promises.

At least women have a voice now and are treated with greater respect.

The event was smaller than today, but the outcome was ultimately the same.

It was an echo chamber. A dog and pony show.

And as more health care events have popped up in the wake of the HIMSS success, they all seem to have the same premise — to make money, to push agendas, to talk about the same crap year in and year out.

It’s all just a game, played by people who have you hoodwinked.

What are we doing? This isn’t health care. It isn’t medicine.

We need to shape up. We need to do things right again. And for the right reasons.

We need to build an ecosystem of caring instead of EGOsystem of not — where personal agendas drive the agenda. But the “EGOsystem” has torn down the system of caring — instead, building a system of corruption and greed — and the patient is suffering. Clinicians are suffering.

We need to start solving real-world problems instead of creating Disneyland-style experiences.

Band-aids are more valuable, quicker, and less work — easier to replicate from client-to-client.

Geo Metros are easier to make and sell than finely crafted Ferraris.

There’s a reason we’ve talked about things like interoperability in health care since circa 2004.

We can solve it. You know we can. We’re the second-most technologically advanced nation in the world. Other industries accomplished interoperable feats years, if not decades, ago.

Yet, we just keep talking about it, incrementally improving year after year at a snail’s pace. And end-users keep buying the sexy new pieces of the puzzle each year instead of just assembling the whole puzzle to begin with because vendors hold them captive.

The reality is, building Ferraris would likely bankrupt health care technology vendors in the long-run.

It’s all about the dollar.

It’s not about the patient.

And we’re just a bunch of fools who let it continue to be for the sake of making a quick buck.

I learned that my first year at HIMSS. And it rings true today, now more than ever.

There are inquisitive minds — physician leaders, patient leaders — who have developed remarkable solutions to real-world health care problems. But they sit off on the outer fringes in cardboard-style booths at industry events. Their voices silent. Out of sight and out of mind because the big boxes of health care can market better, and sell better, and go-to-market better because they have the coffers to outspend them probably 1,000,000,000 to 1.

We’re so drawn to the echo chamber of BS in health care, that’s all we see. It’s all we hear. It’s all we believe. It becomes what we buy.

The health care industry will improve. Our seemingly dead physician leaders must return.

But they aren’t dead, they’re just dormant at scale. There are still models of what physician-led organizations look like and what they can do. But those organizations are few and far between.

Our physician leaders will emerge, right?

They’ll move back into our communities, commune with us again and understand us.

They’ll turn back time and say screw volume and focus again on the art of medicine.

Physician leaders gave up their seats at the table long ago. Until those same physicians pick back up the paint brush and are willing to sit back down and take their seat back at the table, they will continue on looking at a blank canvas instead of making good art.

We need you back. And, so does the next generation of physician leaders.

Or, perhaps, is it greater than the physician — whom alone can’t dig us out of the rabbit hole we have created? They may lead us, but it will take all of us — physicians, patients, executives, vendors, advocates, community members — working together to crawl out of the hole and fill it back up again so we can stand on new ground and co-designing a better future.

We just have to see it. We have to believe it.

Our communities are counting on us.

How physicians can develop their emotional intelligence 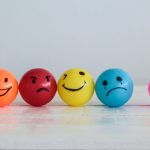 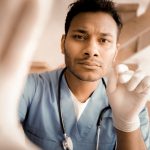