Many times I have been approached to tell my story of being part of a physician family. Where would I begin? How does one cover respect, love, trust, commitment, resilience, frustration, loss and longing in one brief message? It isn’t done. I’ve decided to give you as brief an overview as I can, then, if there seems to be interest in any particular aspect, I can expand on that element another day.

If my father had been able to have his way, I’d have been born into a physician family. As it stood, I was part of a medical family — my mother was an RN. Dad wanted to go to medical school. He was 19 when he graduated from Tulane, worked in order to save funds, then the stock market crashed. He took a job with the fledgling Dow Chemical Company and became a patent attorney, instead.

Mom was a wonderful example of dedication and service, not only in her white uniform, but also as a community volunteer. She didn’t practice nursing much after my sister and I came along, but she would use her connections with area physicians to collect leftover medications and used equipment. We would make an annual trek to Detroit to deliver the items to World Medical Relief.

From an early age, they taught me to answer the question “What do you want to be when you grow up?” with “I want to be a doctor, because my mother was a nurse, and she wants me to go all the way.” It sounded better at the time, but could easily be misinterpreted these days. In any case, it wasn’t what I wanted. Mom’s example did set me on the path to being a career volunteer, and I appreciate that.

During my first semester at the University of Michigan, some members of the arts chorale were going to meet to go caroling. When I arrived at the gathering point, only one other chorus member was there. He liked to say that I fell for him on our first date, although it wasn’t a date. I did fall, however, despite his promise to keep me upright on the slippery sidewalks of Ann Arbor. Dwight informed me that he had been accepted into medical school and would be starting the next fall — without completing an undergraduate degree. We married two years later, midway through medical school, and lived in a studio apartment in married housing.

I can’t say that it was easy during those lean years. I had a lot to learn about myself and about being part of a dedicated couple. We walked to the grocery store. We purchased only what fit in our $1-a-day budget and had to be able to carry it back home. We then moved to Evansville, Indiana, for his family practice residency. A two-bedroom apartment neighboring both a grocery store and a movie theater was heaven! We walked over to the theater more times than I could count to see Star Wars.

With only one car, I’d either have to rely on public transportation or ride with Dwight to go do anything further away than the store. He took me to the hospital with him one day to meet with the secretary of the volunteer department. I signed up that day and started my career. I became close to that secretary, and so many of the other staff and volunteers, that it was very difficult to leave at the end of those three years.

We moved to Salt Lake City and rented a two-bedroom house. I walked a couple of blocks to volunteer at a hospital until a month before our only child was born. When Jennifer was 18 months old, we bought our house in the mountains, between Salt Lake and Park City, Utah. It was a great area to raise a child, but very isolated. We finally had a second car, and I joined the Salt Lake County Medical Alliance Bowling league. They had free babysitting, so Jennifer had a chance to socialize with other little ones before starting kindergarten. I had adults to talk to, who were all married to physicians and understood. I became involved with the county Alliance board.

I also volunteered for Girl Scouts of Utah. Whenever I needed to focus on one volunteer position, I’d put the other on the back burner for awhile. Dwight understood my need to be involved and to be totally committed to an organization. He was my strongest supporter.

One big test for us was when he was fired by the HMO he had joined in order to give us more family time together. It shook our world, but we got through it. Little did we know that it was a blessing in disguise. It gave us our retirement years early, allowing us to travel and be together. Jennifer went off to college, and we had to adjust to being home so much of the time together.

In the spring of 2010, Dwight sensed something was physically wrong, but couldn’t quite tell what the problem was. We had screening colonoscopies, but that wasn’t the problem. After ruling that out, reality began to set in that it might be his prostate. Indeed, he was diagnosed in late July with stage IV prostate cancer. We had some very intense and necessary conversations about end of life, and what should come after. He expressed his wishes to be cremated and to have his ashes scattered at some of our favorite places, as well as places he’d never had the opportunity to visit. My shaker container of Mrs. Dash now accompanies me on my travels. She’s not as much fun as he was, but I smile anyway.

He died in August of 2012. It has been a difficult adjustment. I do love my new house, having moved a year after his death. My daughter and I have become extremely close and love to sing together in our local Sweet Adelines chapter, Mountain Jubilee Chorus. I still bowl, and still have the support of that group of people who totally understand the challenges I faced — though few have reached the stage of widowhood.

My time on the AMA Alliance board has come to a close, at least for now, but I am fortunate to be a Trustee for the Alliance Health Education Initiative. There is no longer a physician in my life, but I will always be part of the greater physician family, and I am forever grateful.

Pat Klettke is a freelance writer and former board member, AMA Alliance.  This article originally appeared in Physician Family.

The July Effect is here! What that means depends on who you are. 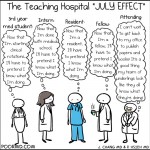 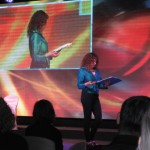 There is no longer a doctor in my life, but I’ll always be part of a physician family
2 comments