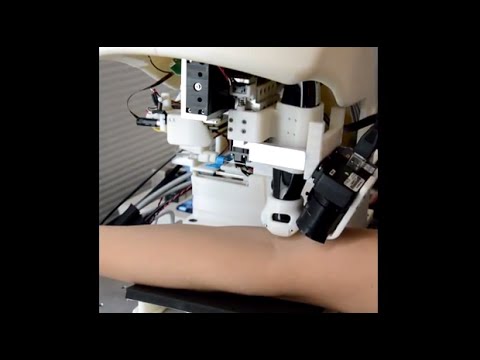 A company has produced prototype robots that can draw blood from human arms. The video above is a 48-second video showing one of them in action.

Using an infrared camera, the robot identifies a suitable vein and accesses the vein with ultrasound guidance.

A second video, not embedded in this post, explains that the robot is about 83 percent successful at drawing blood that compares favorably to the success rate of experienced human phlebotomists. The robot’s inventor hopes to refine the procedure to get the success rate up to 90 percent.

It also says that there are 9 billion blood draws per year in the United States suggesting that a market is certainly there.

The second video also mentions the discomfort patients experience when a phlebotomist misses or damages the vein.

However, the robot needs quite a bit of help from a human phlebotomist both before and after the actual blood draw takes place.

The robot can’t apply a tourniquet, can’t wipe the skin with alcohol, can’t take the cover off the needle, once the vein is accessed can’t actually remove the blood from the vein with a syringe, can’t take off the tourniquet (the human assistant didn’t do it correctly either — one must undo the tourniquet before taking the needle out of the arm or the back-pressure will cause bleeding and/or a hematoma), can’t apply pressure to the puncture site, can’t put a Band-Aid on the skin, and can’t safely dispose of the needle.

It’s not clear what the robot would do if a patient flinches or withdraws his arm. Patients have been known to do those things.

For the foreseeable future, the robot would have to be accompanied by a human. So whatever the cost of the robot, personnel would not be eliminated.

It’s a clever idea, but I don’t think a robot will be drawing your blood any time soon.

This doctor didn't support Vivek Murthy. And it's not because of what you think.

Can a robot draw your blood?
24 comments