It is well accepted among health economics wonks that the lion’s share of pharmaceutical company profits come when these companies hold exclusive rights to their products. Once their blockbuster pills go “generic,” competitors enter the marketplace and profits plummet. Consider captopril, a groundbreaking heart failure medication introduced in the early 80s by Bristol-Myers Squibb under the trade name Capoten. After making a fortune for the company, captopril went generic in 1996. By 2013, you could purchase a captopril pill for the lofty price of … hold your breath … 1.4 cents.

Not many fortunes to be made at that price.

Of late, however, the well-accepted cheapness of generic drugs has come under question, in the face of surprising price hikes for long time medications. As reported in the New England Journal of Medicine by Jonathan Alpern and colleagues, captopril has experienced a 2,800% price hike. OK, that still leaves the pill pretty affordable, at 40 cents a pop, but that’s still a pretty hefty price hike for a generic pill that competes against other generic medications.

Or consider albendazole — not the patriarch of a dysfunctional 80s sitcom family, but instead an antibiotic used to treat parasitic infections. The patent on albendazole expired eons ago, but unlike the popular captopril, which quickly went into generic form, no generic manufacturer applied to sell this relatively rarely prescribed drug. Not many Americans experience parasitic infections, so they did not see enough market to warrant investing in the product. So the original manufacturer continued to sell a trade version of the drug, priced at about $6 per pill in the United States and $1 a pill overseas.

How could they do this? For starters, they faced no competition to sell albendazole because, as noted above, no generic company had chosen to manufacture it. In addition, the company making mebendazole, a similar medication, had decided to halt production of that product. Add to that the increasing number of recent immigrants who require anti-parasitic treatment in the U.S., and you finally have a lucrative market. Look, for example, at how much Medicaid programs spent on albendazole over the last six years: 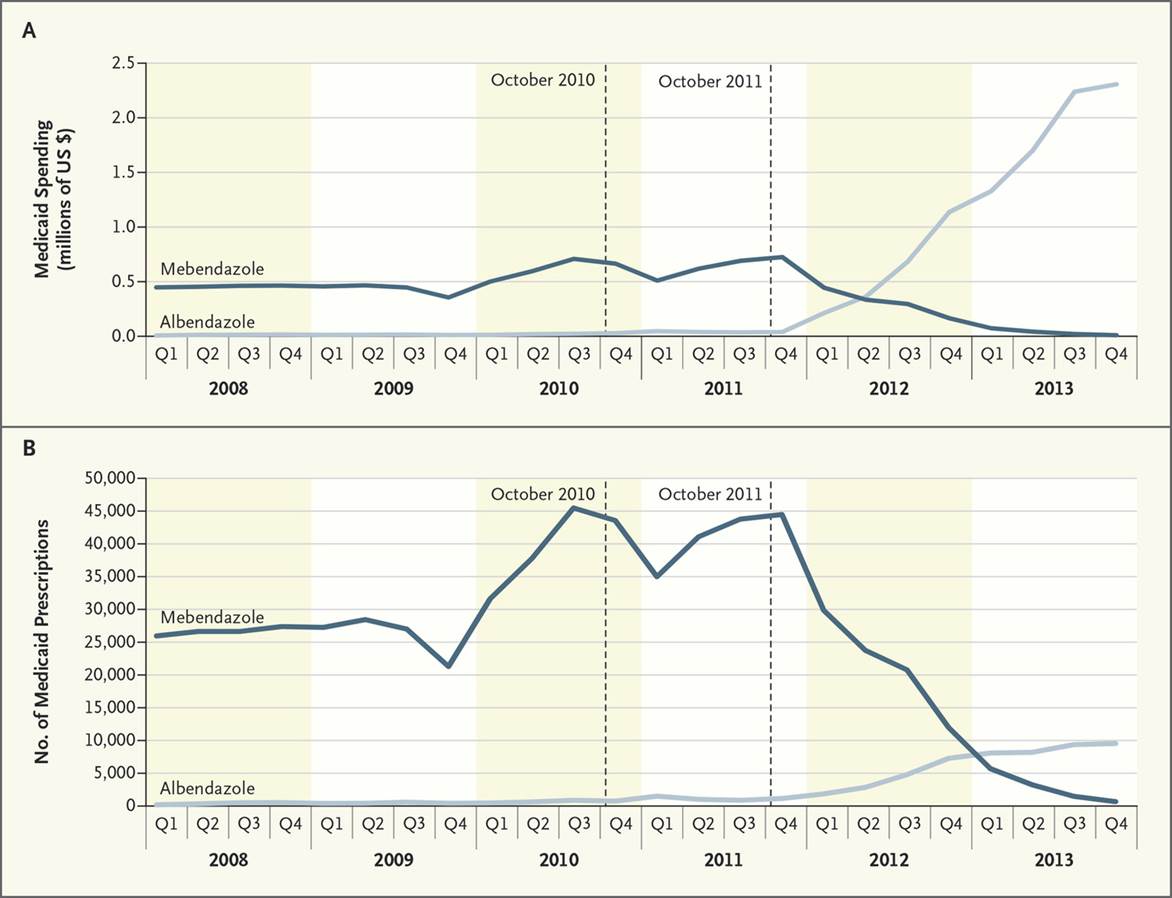 Medicaid spending and prescriptions for albendazole and mebendazole, 2008 to 2013.

Normally, monopolies are illegal. But there is nothing illegal about a company making a product that no one else wants to make. Any pharmaceutical company jealous of Amedra’s bottom line can choose to develop a generic version of the drug, and compete for market share by charging less for their product. Of course, they will have to develop the ability to manufacture the drug, conduct tests to determine whether their generic version works as well as the trade drug, and then wait for the FDA to review its application. Meanwhile, Americans will pay a hefty price for a patentless drug.

The metaphors of illness

Physicians are the Rosetta Stone for patients

How are drug companies making millions from generic drugs?
6 comments