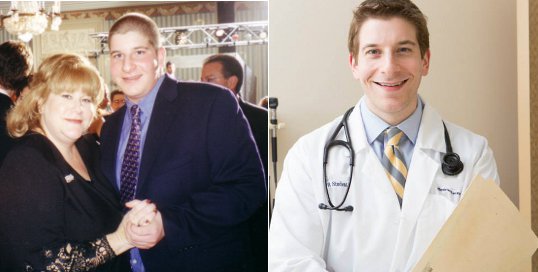 I am a recovering addict.

My compulsion started when I was 10-years-old. I remember thinking about when I would get my next fix. These feelings got in the way of my ability to perform scholastically and socially. I yearned not for marijuana, cocaine or heroin, but for something with much easier access and profound availability.

Too many people, including the media and some medical providers, view obesity as voluntary and self-inflicted.  But it’s a disease. The United States is one of the most obese countries in the world, with more than 35 percent of our patients suffering from the illness while draining the health care system of $147 billion annually.

While the problem is incredibly complex, it is abundantly clear that diet plays a critical role.

My typical dinner in high school consisted of an entire meat pizza, deep-fried mozzarella sticks, baked ziti layered with thick cheese and a container of ice cream. Like many addicts, I knew I was doing harm to my body. But I simply could not stop — until I couldn’t get a date to the junior prom.

What followed was a five-year, deeply personal journey to ultimately lose 130 pounds.

My transformation took several years and involved learning about proper nutrition and exercise. I began making healthier food choices by eating grilled chicken, ordering steamed Asian dishes when I ate at restaurants and greatly increasing my intake of fruits and vegetables. I also drastically changed my activity level and performed a minimum of one-hour of cardiovascular training four days per week.

The experience taught me many invaluable lessons, some of which I wish to impart.

1. Set milestones. Cutting a large amount of weight is a massive undertaking that takes time and effort. It is easy to run out of steam along the way. If I had set out to lose 130 pounds from the start, I surely would have failed. Rather, my goal was to reduce my weight by 2 to 3 pounds per week. I never made a weight loss goal more than a month into the future (for example, going from 330 pounds at the beginning of a month to 315 pounds by the end).

At the same time, having a goal that doesn’t relate to the numbers on a scale is worthwhile. After completing my weight loss, I rode in the Pan-Mass Challenge, a 180-mile two-day cycling event to raise money for children’s cancer care and research.

2. Make healthy lifestyle changes. I once had a biology professor who boldly declared that all diets work. She was right. From low-carbohydrate to juicing, all diets do in fact work. But only while they are being followed. The reality is that no one can live their life confined to the restrictions of fad diets.

Beating obesity has nothing to do with “dieting” and everything to do with lifestyle changes. I have come to believe that the overwhelming majority of individuals (and patients) have an understanding of what is healthy and what is detrimental. Lifestyle changes are about taking action based on that knowledge.

For me, it was playing one hour of video games per day instead of four. It was making the right nutritional choices before the plate was even placed in front of me. It was putting down the utensils when I was full.

3. Find cheerleaders. As with any large life undertaking, losing weight demands encouragement and backup from a support system. Some individuals turn to family, others to friends, some to groups like Weight Watchers — and many to medical providers like us.

My cheerleaders were the countless individuals who recognized my progress over the several years it took to become successful.

This is not a lost cause

Regardless of discipline, if a patient arrives at a medical appointment with an extensive smoking history, they are likely to receive some tobacco cessation counseling. With obesity surrounding us and some providers suffering from it themselves, many of us have become complacent. It took time for the medical community to make a dent in tobacco use, and we must place the same effort into obesity prevention, counseling, and treatment.

As medical providers, we have the power to make a difference and increase the quality of life and longevity of this vulnerable population.

My story is one of the many examples of individuals who have achieved their fitness and health goals. There are countless patients who still need our help.