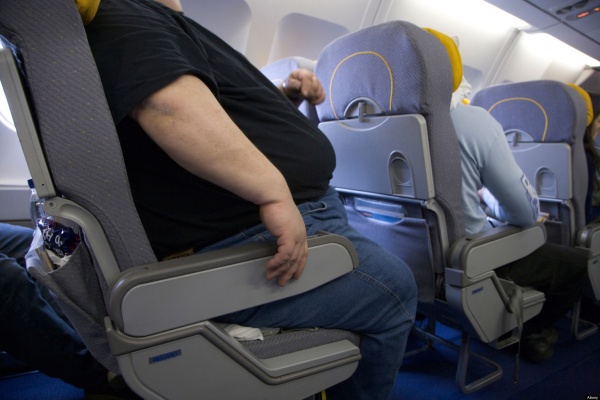 Recently the wires have been active with suggestions that people with obesity pay more for airline travel. This discussion was prompted by a Samoan airline announcing that they would begin charging passengers by the pound. It was also stimulated by Bharat Bhatta, an economist from Norway suggesting that heavier passengers pay a surcharge while lighter passengers are offered discounts.

The logical argument of course is that larger individuals take up more space and use up more jet fuel.  This line of reasoning is sure to find ample supporters, as people who “choose” to be fat must clearly bear the consequences of their gluttony and sloth.

But why stop at airline travel? Here are some additional ideas for where businesses could charge larger individuals more:

1. Cab rides: This is not just to cover additional fuel costs but also to pay for wearing out the suspensions (assuming that these actually exist in cabs);

2. Hotel rooms: Not only will this cover the mattress surcharge but also cover the cost of the increased consumption of water, soap and extra towel required to “service” the greater body surface;

3. Gym memberships: To cover the additional wear and tear on the treadmills and other exercise equipment;

4. Amusement park rides: To pay for taking up more space, using more electricity and taking longer to load and off-load;

5. Ball games: For occupying an extra seat and obstructing the view.

Why not add all of these to the list of things that obese people are already paying more for like health and life insurance, oversized clothing, bigger cars and sturdier home furniture?

That will certainly teach them to finally see the light and begin shedding those pounds.

But wait – did anyone mention that obesity rates are already markedly higher in poor income neighbourhoods, and that being obese already reduces an individual’s chances of employment and promotion despite ability?

The assumption underlying the “pay as you weigh” pricing strategies is that body size is a matter of choice and responsibility.  Unfortunately, for most this is not the case.

Let me state it clearly: Obesity is not simply a matter of laziness, overindulgence or lack of will power.  It is a result of complex and diverse drivers of weight gain, including genetics, medications, stress, depression, addictions, eating and sleeping disorders and gut bugs – to name just a few.

The fact that obesity is far less under individual control than generally assumed is further evident from the fact that fewer than one in 20 individuals embarking on a weight loss attempt are likely to keep any of the weight off. The jury is still out on whether such failed attempts at weight loss are detrimental to health – they certainly are to the ego.

There could also be a number of unintended consequences of such a “pay as you weigh” policy, such as people starving themselves and abusing diuretics, laxatives and anorexic agents (including tobacco) to lose weight prior to boarding a flight. Such unhealthy weight-control practices are already widespread amongst competitive athletes who participate in sports that involve weight categories (e.g., boxers and wrestlers). This could be life threatening when it involves patients who are on medications for blood pressure or diabetes, where even short term attempts at weight loss can result in increase health risks, such as stroke n and hypoglycaemic shock, for example.

A single emergency landing because of a diabetic patient skipping breakfast before weighing in for a flight would by far outweigh any potential savings to the airline (not to mention the inconvenience to other passengers).

Ultimately, however, it is a matter of fairness.

If airlines wish to treat their passengers like cargo, then a pay-as-you-weigh policy may appear justifiable.  But if an airline sees itself as providing a service, namely, transporting human passengers, then the average price of a ticket (and the average size of a seat) should increase. This is the only fair distribution of costs, and the only fair way to accommodate everyone.

Playing a game of blame and shame is not a constructive solution to the obesity problem.

What I look for in an EMR: Think of a good story

Charging passengers by the pound is unfair
49 comments