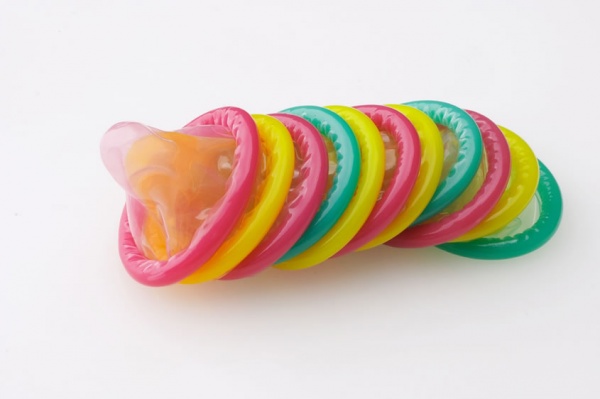 Think of the last few times you watched a popular movie that involved any kind of sex scene?  Not as in pornographic sex, but as in two characters ended up in bed together and had, ahem, conjugal relations.

In how many of those scenes did either participant make mention of a condom before the act?

We face a public health crisis of sexually transmitted diseases and unwanted pregnancies, in large part because so few people use condoms.  According to CDC estimates, Americans experienced 20 million new sexually transmitted infections in 2012, with half of those striking America’s youth. The majority of these infections could have been prevented by condoms.

There are lots of reasons people do not make enough use of these life-saving prophylactics.  Unplanned sex happens,  where neither partner is prepared.  More often, neither party wants to spoil the moment. According to a survey of 15-21 year olds conducted by researchers at Brown University, young people are hesitant to use condoms for two main reasons: concern that condoms will make sex less pleasurable and fear that their partners will get upset by a request to use a condom.  No one wants to appear untrustworthy.  (“If I insist on a condom, even though I am already on birth control pills, it will look like I am accusing him of having a disease!”)

Hollywood could help us solve this problem, by normalizing condoms, even by making them cool. If James Bond starts talking about condoms, maybe other guys will follow suit.  Doubt this would work? When psychologist Sonya dal Cin showed teens a clip from the first Die Hard movie, she discovered that those exposed to scenes of Bruce Willis’s character smoking developed more favorable attitudes toward cigarettes. There’s a reason companies pay big money for product placement. It works!

Even more importantly,  Hollywood could help people learn how to handle these delicate situations by providing good, and sexy, examples of responsible behavior. People don’t know how to talk about condoms in the heat of the moment.  Think about it.  A 23-year-old guy doesn’t know until this very moment whether the girl he’s been fondling will let him go all the way.  Now that she is indicating her willingness, he panics.  He worries that if he brings up condoms, he’ll risk being called out at third base.  And his girlfriend may be thinking the SAME THING. Both want to use a condom, but neither is willing to risk bringing up the topic.

Hollywood could help us address this problem.  If Megan Fox cuts off a guy until he agrees to wear a condom, the language she uses, the confidence she displays, could give other women an idea of how they can pull of the same feat.  And this modeling of behavior is really important.  Most people, after all, have witnessed hundreds of screen kisses before they’ve actually kissed another person.  They’ve seen dozens of people ask other people out on dates, before they have asked anyone out on a date.  We learn a lot from the movies about the basics of romance.  But we rarely learn about the basics of safe sex.

Perhaps most importantly, Hollywood could make condoms sexy.  “I need you to wear a condom,” the sultry actress says.  “I will feel safer and you will last longer!” If condoms were shown to be a normal part of a successful love life, people exploring their first sexual experiences wouldn’t be as prey to the myth that condoms kill romance.

Sadly, the entertainment industry rarely touches upon this subject in its popular TV shows and movies.  TV stations even refuse to air condom ads if the ads get too explicit.  A site I frequently blog on even took down this post, for reasons that elude me even now, after I asked them to explain. It started with “we need more evidence that STDs are a major problem” but I think it ended with (implicitly) “we are uncomfortable with this condom stuff.”  This prudeness is hypocritical, of course.  Sex is pervasive in movies and television and the internet.  What is underrepresented is explicit discussion of safe sex.

We are left in a situation where all of us are simultaneously exposed to ubiquitous acts of sexual promiscuity while shrinking away from discussing condoms, because that’s too sexually explicit.  We are oversexed prudes!

And the result is inevitable.  Too many unwanted pregnancies.  And too many preventable illnesses.  The entertainment industry is contributing to an STD epidemic.  Time for them to put condoms on their most attractive stars.

Hollywood could go a long way towards making condoms sexy.

Stop asking why and strengthen your relationships with patients